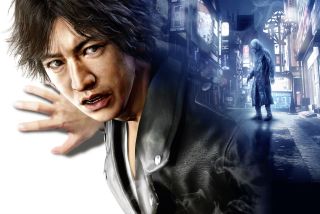 There's a certain charm to be found in Sega's long-running Yakuza series. And yet, after enjoying the self-aware gangster drama for close to 15 years, it feels like the right time for developer Ryu ga Gotoku Studio to make a change. Enter Judgment, the series spinoff that looks to merge Yakuza's action with the investigative antics of Ace Attorney.

Judgment actually launched in Japan, back in December 2018. Thankfully, Official PlayStation Magazine contributor (and Japanese speaking) Malindy Hetfeld is on hand to give us all an early idea of what to expect. Malindy has already played through the entire game and is here to offer impressions of the upcoming action-adventure ahead of its release on PS4 in the West on June 25, 2019.

With the release of Judgment, developer Ryu ga Gotoku Studio is welcoming us all to the extended Yakuza universe. While Kazuma Kiryu’s story reached its conclusion in 2018's Yakuza 6: The Song of Life, if we have learned anything during our time with the long-running series it's this: Crime never sleeps.

If you’ve never touched a Yakuza game, Judgment serves as a great introduction to Ryu ga Gotoku Studio’s unique style of games – a dramatic crime narrative full of twists, offset with a ton of minigames and side-quests that highlight the quirky side of Japanese pop culture.

Sometimes one event is all it takes to change a life in the blink of an eye. Takayuki Yagami is one of Tokyo’s most popular defence attorneys, said to be able to close any case no matter the challenge. In the prologue to Judgment, his entire career comes crashing down as a man Yagami once defended from murder charges kills his girlfriend and sets his house on fire. Riddled with guilt, Yagami vows never to work as a lawyer again and takes to the semi-fictional streets of Kamurocho, Tokyo as a private investigator.

A new face in a familiar city

Judgment has the tricky task of retaining what made Yakuza so popular while introducing some fresh elements to play. After getting my hands on the full game, it's pretty clear to me that Ryu ga Gotoku Studio is not leaving its roots far behind. Yakuza and Judgment are unmistakably two sides of the same coin, as they share their most important character: Kamurocho. Yes, the virtual version of Tokyo’s Kabukicho district makes a welcome return. A mainstay of the Yakuza series, this version is identical to the Kamurocho in Yakuza 6 and seasoned players will feel right at home among its restaurants, mahjong parlours, and arcades.

The biggest difference between Yakuza and this new IP, then, is Yagami himself. Yagami is no member of the criminal underworld, but he is familiar with it all the same. His associate Kaito used to be a yakuza, for one thing, a fact that comes in handy more than once when Yagami needs some extra manpower. Add to this how his old law firm handled more than one case for Tokyo’s Tojo clan of yakuza before the fateful murder case that changed Yagami’s life, and you can see how he gained the reputation for providing good service in these circles.

The case Yagami eventually gets involved in revolves not only around the gruesome serial murder of yakuza from western Japan, but also a group of masked, parkouring delinquents. It’s another multi-faceted yakuza murder mystery, told from the perspective of an unusually talented civilian. Yagami has a different view of the city to Kiryu, and he must depend on different allies as a result.

A change of pace

Whereas much of the action in the Yakuza games takes place at night – in the bars and clubs frequented by less savoury individuals – you now mostly work during the day, relying on a network of professional acquaintances and any hint and witness you can scrounge up.

It's all about escapism

When the life of a private investigator gets you down, why not play a video game? Sega has included several emulated versions of classic games for you to play at the arcade. You’ll find Virtua Fighter 5, Puyo Puyo, Motor Raid, Fantasy Zone, Space Harrier, and Fighting Vipers. Since you play all these in a Japanese arcade centre, trying your luck at catching a plush toy in an UFO catcher claw game is also a must. We’ve had the most fun with an arcade game developed just for Judgment: Kamuro Of The Dead is an arcade shooter featuring the residents of Kamurocho as bloodthirsty zombies out for your hide.

Judgment’s gameplay, too, reflects the fact that Yagami’s equally brainy and brawny. As an investigator he has to find evidence that will hold up in a court of law. For that, beating everyone into a pulp simply won’t do, but as a private investigator he has some leeway all the same. Judgment introduces new detective gameplay that allows you to shed light on a case. Tailing someone is a classic: You hide in crowds and behind walls to remain unseen as you wait to see what a suspect is up to.

You can now also investigate potential crime scenes. Following a tip, you often go and take a second look yourself. Once at the scene, investigation mode begins. In first-person perspective you scan backyards and alleys to find any evidence that may help, such as a broken security camera, a potential witness, or anything else suspicious. Sometimes you get to pilot a fantastically unstable drone so that you can find the evidence you need without having to show your face in front of a suspect and his goons.

Yet another new aspect of gameplay skirts the edges of legality in similar ways: Sometimes you have to wear disguises in order to get closer to your target. More than once you get into a situation where you have to frantically lie to someone in order not to blow your cover – this is done by picking from different dialogue options.

Yagami is also great at picking locks. The accompanying minigame requires you to slide bolts into place or twist door knobs with the analogue sticks at the right speed to make a lock give way.

When you do eventually corner your suspect or find that all-important witness, you confront them with the evidence you have collected. Choosing the right evidence can expose blatant lies or simply cause someone to crack under pressure until they give up the next piece of the puzzle.

All this sleuthing isn’t to say that Yagami doesn’t know how to dish it out. Kamurocho still has its fair share of rowdies who don’t seem to understand any language other than that of punches and kicks. Street battles now start seamlessly – as soon as a group of enemies spots you, it’s go time.

Yagami is a competent fighter, with quick and nimble moves and a distinct martial arts fighting style, which makes him a joy to control. The combat made it over from the recent Yakuza instalments to Judgment with only a few quality-of-life improvements. Yakuza’s heat actions (basically over-the-top finishing moves) are now called EX Actions. As soon as your EX bar is filled, and the opportunity presents itself, you can unleash an attack on your opponent that rivals a fighting game finisher in terms of style and impact.

A few of these attacks have stayed the same since Yakuza, such as bashing baddies on the head with a traffic cone or dropping a bicycle on them, shortly followed by your full body weight. Yagami can somersault with the best of them, and so over the course of the game you pick up many more special attacks that would simply have been impossible for a hefty guy like Kazuma Kiryu to execute. The boss battles are regular displays of Yagami leaving behind gravity altogether – an exciting change, because boss battles in Yakuza often were quite drawn-out affairs.

Does Judgment move the series forward?

When he’s not following the trail of a murderer around Tokyo, Yagami has to earn money to keep the lights on, and that means doing some more old-fashioned private detective work. Whereas in Yakuza you bump into people with odd requests, in Judgment you collect missions from a noticeboard in your office, where they’re sent by your old law firm.

In these missions you find the same eccentricity mixed with just the right amount of touching drama that made Yakuza such a hit. You’re likely to find more than one side-mission weird enough to want to tell your friends about. Yet the subjects covered, too, are very familiar if you’ve played any Yakuza games. Host clubs, idols, perverts, and small kids in need of a helping hand once again provide some light-hearted entertainment to balance the dramatic main story.

As a character, Yagami has certainly opened up new avenues to make things even more action-packed in Kamurocho. He’s the perfect character for carrying out complex investigations and over-the-top skateboard chases alike. The quality of storytelling hasn’t suffered one bit, making Judgment a worthy Yakuza spinoff. However, when you play it becomes really obvious how important Kiryu was to the franchise; Yagami is missing quite a bit of the beloved gangster’s bumbling charm.

That said, for new players who are put off Yakuza by the thought of having to play six separate games to get to know the full story of the series, or those who simply want a breath of fresh air, the calm, cool ex-lawyer might be just the right guy. Judgment still features enough high-strung delinquents in flashy suits to retain the spirit of a game that combines serious subjects with skateboard pursuits and panty thieves. And that’s not something you play too often.

What does it take to make a game like Judgment or Yakuza? EDGE dives deep into the portfolio of Sega's Toshihiro Nagoshi in his own words