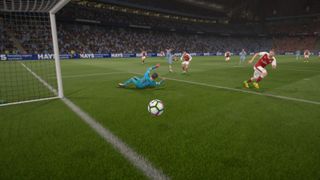 Iceland's run to the quarter finals was the most romantic story to unfold at Euro 2016 over the summer - yet the plucky islanders with the tournament's most memorable chant aren't in FIFA 17. And the BBC reports that it's all down to the Icelandic football federation feeling lowballed by EA's financial offer to have them in the game.

Apparently the publisher offered $15,000 (£11,500) as remuneration for Iceland to be added to the list of national teams, but the KSI (Knattspyrnusamband Íslands, and try saying that with a gob full of M&M's) deemed this too paltry an amount - making Iceland exclusive to PES 2017.

"[EA] are the ones buying these rights and they almost want it for free," says KSI president Geir Thorsteinsson. "The performance at the Euros show that we are quite a good team and many would like to play with our team. It's sad for the players – but the criticism should be towards EA Sports."

"I really feel if we are giving away rights, or offering rights, it has to be proper negotiations and fair fees," continues Thorsteinsson. "I didn't feel that this was done in a fair and open manner."

Iceland missing is annoying, but there's much to love about this year's game - and you can read about it all in GR+'s FIFA 17 review.