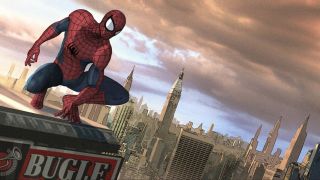 Marvel’s Spider-Man PS4 is out now on Sony's leading console, and not only is it the first licensed property for esteemed developer Insomniac Games, but it’s the first Spider-Man title in years to not come from the Activision-owned studio Beenox. Having originally ported several classic Spider-Man titles to PC in the mid 2000’s, the moderately sized Quebec-based team eventually got the chance to create its own take on the webslinger, cultivating a name for itself as “the Spider-Man studio” with games like Shattered Dimensions, Edge of Time, and two licensed tie-ins to The Amazing Spider-Man movies.

Though Beenox’s output of Spidey titles was steady between 2010 and 2014, the quality of each was less so, especially in the shadow of Treyarch’s Spider-Man 2, which remains a benchmark for Spider-Man games still to this day. With Peter Parker making his big comeback this month, however, I figured it would be an apt time to chat with Beenox’s co-head Thomas Wilson to look back on the past, present, and future of Spider-Man’s ever changing relationship with interactive entertainment, and the studio’s own history with the character in particular.

“At the time, the ask was to rejuvenate the franchise with something that would be new and innovative, so Activision had given us carte blanche to start brainstorming ideas inspired by the comic books, not the movies. So we started to look for anything that hadn’t been seen in a game before. There had already been a few Spider-Man games out there, but our Senior Producer was a huge comic book fan and he started talking about Spider-Man 2099, Spider-Man Noir, and so on, who I’d never heard of before, and so we came up with this idea of playing multiple Spider-Men within the multiverse. From there, we could create four different universes with their own art styles and a Megaman structure where players fought a boss per level, which we thought was a nice twist on the Spider-Man open world tradition.”

“Shattered Dimensions was the game we had the most fun creating. It was the most chaotic development, but this idea of coming up with four distinctive art directions injected a lot of personality into the level design and boss battles. I wish we could have done a Shattered Dimensions 2, as there's so much content to draw inspiration from in the comics. Now, of course, the industry has evolved, but after the first game I wish we could have jumped right into the sequel, because I loved the formula and approach we had.”

After the success of Shattered Dimensions, Beenox was in the unfortunate position of attempting to follow up on struck gold with limited resources. Edge of Time took place in two different Spider-Man universes, down from Shattered Dimension’s four, as the Amazing Spider-Man worked with Spider-Man 2099 to stop a powerful foe that threatened them both. Many found Edge of Time to be strangely limited and repetitive compared to the previous game, but Wilson explains that Beenox had been under a lot of pressure.

“The big difference with Edge of Time is that we had very little development time, and I guess that's the reason why some of the fans were potentially disappointed that it was half of what Shattered Dimensions had been. It was a situation where a game needed to be released quickly, so the decision was made to focus exclusively on Amazing Spider-Man and Spider-Man 2099, as we knew that it was a storyline that we’d seen in the comic books."

"There was this cause and effect gameplay idea where what you were doing in the Amazing Spider-Man time period would affect what was going on the future, so there was a few situations where we had a picture-in-picture experience where a villain was killing Spider-Man 2099 and you had to defeat him in the other timeline first. It was definitely a smaller game, though, and I think that’s where it really fell short.”

With two original Spidey titles to its name, Beenox was eventually put to work by Activision on a movie tie-in game to The Amazing Spider-Man reboot starring Andrew Garfield. It would mark the first time in a long time that players could get back to liberally swinging around Manhattan as the webhead in a video game, and Wilson welcomed the challenge to return the character to an open-world after his brief stint with linearity.

“We worked closely with Marvel and Sony to understand what their vision for this reboot was, and what we could do to come up with something that was tied to the movie. So we returned to Manhattan and, using our technology, we basically created a city editor that let our artists build the city from scratch. We went on location and took a lot of pictures to get references; we’re not New Yorkers, so we wanted to make sure that we created a city that was close enough to the real thing.”

“This was right around the time developers were no longer just recreating the movie’s story in a tie-in game. The tendency was to make a game inspired by the movie but not bound to the same narrative, so from that point on we had quite a lot of freedom to look for things that we thought would make sense within the world of the Amazing Spider-Man. It’s a process that required us to talk to Marvel’s experts and to Sony to explain our intentions, but they felt pretty good about our approach and so from there it's just a matter of working with writers to validate that with Marvel.”

As Garfield’s nascent franchise received a hastily made sequel, so too did Beenox’s movie tie-in series. The Amazing Spider-Man 2 was probably the studio’s least well received Spider-Man game of the four, especially as this was Spidey’s first appearance on current-gen consoles, but looked about as technically proficient as an Xbox 360 launch title. Wilson readily admits that it was not the game he’d hope to have finished Beenox’s journey with Spider-Man on.

“There was another movie coming, and we tried to make improvements on the game on a whole bunch of fronts. The graphical fidelity of the city, the combat, adding stealth missions, and so on... but I made one of the worst design decisions of my entire career in that game!”

“We created what we called the ‘Hero or Menace’ system, which was a good idea on paper, where Spider-Man had a reputation meter that went up or down depending on whether the player was taking care of crime or not, but we ran out of varied mission design, so it just felt repetitive and penalising. That hurt us in the reviews when the game came out, and I apologise for that! Sometimes you think something is good, but by the time you realise it isn’t, it’s way too late in development to remove it, so we just tried refining it as much as we could before release.”

So, now that the property is off his and Beenox’s hands, what does Wilson make of Insomniac’s Spider-Man game, and of the evolved superhero genre at large? You won’t be too surprised to hear he’s just as full of praise for the studio as everyone else is right now.

“I think Insomniac taking over the reins of Spider-Man is great. I’m a huge fan of their games and I’ve been playing them for a long time, so I was watching closely when I found out they were developing it. I haven't had a chance to play it yet, but I’m look forward to trying it out. What I’ve seen so far looks great!"

“I will say it brings back nostalgia, especially as in their case they’ve had like five years of development to make the game. I only wish we had five years on any one of the Spider-Man games we made! Superheroes are great characters to be making games for, and working on them is a lot of fun. To me, it doesn't matter how the characters evolve in the theaters, because you can pretty much dive into the content that each movie offers to make a game of your choice.”

From superheroes to super soldiers

At the moment, Wilson and the rest of Beenox are hard at work helping Treyarch bring Call of Duty: Black Ops 4 to PC, which he calls a “AAA PC title with all the bells and whistles that involves”, but the studio’s co-head promises big things from the studio in the long term.

“I can’t really talk about it, but all I can say is that what’s coming is super exciting. We have a great future in front of us, and Activision is a big family so there’s a lot of opportunity to work on some very cool titles. You just look back to our first title, a tie-in game to Bee Movie, and you can see it’s been quite a journey for the past 13 years. I feel very privileged to be a part of it all.”

For more vigilante antics, check out our run down of the best superhero movies of all time, and count how many Spideys make the cut.