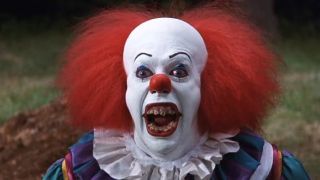 The big screen adaptation of Stephen King's It hits cinemas this week and while it's gained critical acclaim from reviewers - read our write-up here - and promises to revitalise the flagging blockbuster box office, it's by no means the only version worth checking out. Let's not forget that the 1990 mini-series of the same name paved the way for clowns to invade our nightmares (err... thanks?) and gave the television industry gore like it had never seen before. If Andy Muschietti’s version leaves you wanting more, don't wait for Part 2 - revisit Tim Curry's Pennywise and find out how he terrified a generation long before Bill Skarsgård donned white face paint.

In early 1990, Tommy Lee Wallace was called into ABC’s offices to discuss a directing gig on Laurence D. Cohen’s teleplay of It. Cohen had previously written the screenplay for Brian De Palma’s masterful adaptation of King’s Carrie, while Wallace had directed Halloween III: The Season of the Witch and Fright Night 2, edited and designed production on John Carpenter’s The Fog and Halloween, and even donned the mask of The Shape, aka Michael Myers, when actor Nick Castle wasn’t around.

“I was a marginal Stephen King fan, not rabid,” Wallace says. “I’d read two or three of his novels. I had not read It, so I decided to hold back, let the script do the talking. What I encountered made me sit straight up in bed. I called my agent and said, ‘We’ve got to get this; it’s the most wonderful thing I’ve ever read.’”

Richard Thomas, who’d famously played John-Boy in The Waltons and here plays the adult incarnation of Bill Denbrough, nominally the leader of gang, says: “I did not know anything about Stephen King from his books. I only knew him from films. After I got the part, I devoured It. I couldn’t imagine how they were going to put this gigantic book into this format. It seemed to me like it should be on for a week or a month, there was that much richness in it.”

Though plenty of material was inevitably jettisoned, Cohen cracked it by focusing Part 1 on the adult protagonists as they each in turn receive a phone call from Mike (Tim Reid), the only one of them who’s remained in Derry, to summon them back. And so Bill (Thomas), Ben (John Ritter), Richie (Harry Anderson), Beverly (Annette O’Toole), Eddie (Dennis Christopher) and Stanley (Richard Masur) are all granted their own segments – a format that shows like Lost and Orange is the New Black would adopt, years later.

Their chapters are set in the present (mid-’80s), but each phone call also stirs faded memories, thus allowing the action to also flash back to 1958, when The Losers Club, as they named themselves, faced a terrible ordeal. Part 2 is again feathered with scenes set in 1958 but primarily tracks the adults as they’re once more tormented by Pennywise (Tim Curry) and must descend into the bowels of Derry’s sewers for an ultimate showdown.

So what is this evil they face? It most frequently takes the form of a clown (King used Bozo, Clarabell, and Ronald McDonald as models), with its shock of radioactive hair, bulbous red nose, and white greasepaint distracting from yellowing teeth and bloodrimmed eyes. We first meet Pennywise hiding behind flapping sheets on a clothesline, ready to snatch a child from her tricycle, and soon after he is grinning from a storm drain as he proffers the paper boat that Bill’s little brother, Georgie, has been sailing in the gutters. “We all float down here,” he chuckles, then rips little Georgie’s arm clean off.

Pennywise, we learn, has been haunting Derry since at least the 1700s, seeming to pop up every 30 years or so to coincide with a large-scale disaster. He devours terrified children to “salt the meat”. We also learn that the clown is not his true form. He shapeshifts, taking the form of loved ones and the titular beast from I Was a Teenage Werewolf, which plays at the Derry picturehouse.

In the book, we learn a good deal more – that It’s true essence is the ‘Deadlights’, a writhing orange effulgence that, like Lovecraft’s horrors, will send you insane. Humans can best comprehend It in the form of a giant spider, and this avatar in fact guards a gateway to another dimension, while its eternal enemy, The Turtle, a force of good, guards a gateway also. Both were created by The Other, which plays a crucial part in King’s cosmic Dark Tower saga. We’re told that It has been dwelling on Earth for millions of years, awaiting the humans it knew would arrive, and Derry is built upon its lair.

“In the book, it’s very cerebral,” says Wallace. “When we get to the battle royale, we’re faced with a cosmic struggle that is timeless and space-less. It’s an epic struggle between Good and Evil that Stephen King is fluid with; he paints these word vistas.” Wallace laughs. “Well, gee, try putting that on film...”

Try he did – at least in part, with flashes of light and a rickety 20ft spider that’s all plastic and pipe cleaners – but he was hamstrung by budget. Expecting a thick-limbed, meaty beast to work with, Wallace turned up on the day to be confronted with a spindly, tottering puppet. “The spider was less than I wanted it to be,” he says, rather graciously.

But while the climax is a let-down, Pennywise, as played by Curry, is anything but. “He’s just pure evil,” says Curry, who required three hours in the make-up chair each morning. “The clown is traditionally a very cosy, comforting, cheery image. And Pennywise is none of those things. I think of him as a smile gone bad.”

King, who was once unnerved on a book tour when a guy dressed as Ronald McDonald sat next to him on a plane, had long realised that which readers and viewers were about to find out: clowns are terrifying. Recalling trips to the circus, he remembered being freaked out when a group of clowns emerged from a tiny red fire engine: “Their faces were dead white, their mouths were red as though they were full of blood, they were screaming,” he says. “And their eyes were huge...”

Pennywise became nothing short of iconic, his balloons bursting blood (It broke boundaries for gore on the TV), his white hand cracking like porcelain to reveal slimy talons beneath, and his laugh gurgling like sewerage from a standpipe.

But perhaps even more than Pennywise, the reason that Wallace’s It still stands up is that it shares King’s rare ability to capture kids.

“He nails it so well,” says Ritter. “He talks so often about how scary it is, and I’m sure that’s true, but he’s also about the mysteries of childhood, the secrets, the bonds, the pacts, the fears and the tough times of coming through in one piece.” (King knew all about the tough times of being a kid. When he was two, his father walked out, and as a small child he saw a friend get killed by a freight train – an event that partly inspired the novella The Body, better known as the movie Stand By Me.)

More than anything else, It, the novel and the mini-series, recognises how childhood is an adventure but its traumas will scar you and shape you for life. Nearly all of the adults featured in the 1958 portion are bullies, cold-hearted, or overbearing, and it’s only through friendship, loyalty and imagination that The Losers Club can make it through. Not that Wallace might feel quite so inclined to celebrate children...

“We had some of the best actors in TV playing the adults, and I was intimated that such a group of heavyhitters would be hard to work with on set,” he recalls. “But it was the kids, relative unknowns [including a 15-year-old Seth Green as Richie], who gave me a hard time. They got there and argued about their trailers!”

This feature originally appeared in our sister publication Horror - The Ultimate Celebration.