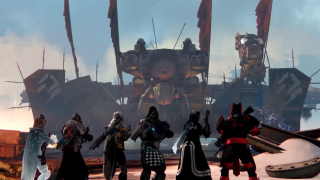 Destiny: Rise of Iron may be out in the wild, but you'll have to wait a bit longer to take on its toughest content. The new endgame Raid, Wrath of the Machine, won't be live until Friday, September 23, at 10am Pacific / 6pm GMT, Activision has announced today.

Wrath of the Machine is still largely shrouded in mystery, but we know that you and five other Guardians will be facing down hordes of Fallen infected with a nanovirus called SIVA. As seen in the various teasers and trailers, there's at least going to be an exciting chase across a bridge, as players run from a very big, very intimidating crusher machine. We also know that the suggested Light level for taking on Wrath of the Machine is 360 - halfway between the old cap of 335 and the new cap of 385.

Destiny players have proven themselves to be a tenacious bunch, but I'm sure Bungie has some new tricks up its sleeve; I'm betting this Raid lasts a whole three hours before it's beaten.

Get the latest Destiny: Rise of Iron news, tips, guides and information in our Destiny Rise of Iron hub which we will be constantly updating.