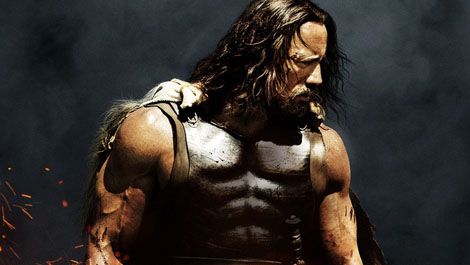 Today’s comic-book superheroes are the modern equivalent of Greek Gods, so why not a swords-and-loincloths bedecked origin story for the nattily clad Batmans, Spider-Mans and X-Men now conquering our screens?

Only Hercules is also an origin story unto itself – based on the Radical Comics title, it offers the truth behind the myth by presenting the fashioning of a warrior who, for all his strength and courage, is flesh and blood.

The action opens with a captured soldier warning his aggressors they will face the wrath of Hercules (Dwayne Johnson kitted with a shoulder-length wig), a demi-god who defeated Hydra, a gigantic boar and a lion to make Asgard tremble as he passed a dozen labours to earn immortality. “What a load of crap,” comes the reply. Man, god of man-god, however, there can be no doubting Hercules’ skill with a sword, and he’s promised his weight in gold by the ruler of Thrace, Lord Cotys (a bushy goatee with John Hurt attached), should he lend his muscle to defeating an evil warlord.

‘Brett Ratner’s Hercules’ are words to strike fear into the bravest of hearts but this is more sly and sprightly than we had any right to expect. Maintaining a neat balance of camp and solemnity, it sees Hercules and his band of trusted allies (Rufus Sewell, Ingrid Bolsø Berdal, Ian McShane, Askel Hennie) rattle through Greece on the kind of odyssey Homer might have scribbled if he had ADD, stopping off en route for a training montage as Hercules whips Cotys’ depleted army of farmers into shape, and engaging in three big battles – dynamic flurries of swords, shields, arrows, scythes, axes, whips, clubs and spears.

The visuals are often murky but the CGI and 3D are decent, and helicopter shots over rocky mountains bring something of a Lord Of The Rings -style scope to the proceedings.

Still, if it's awe you're after, look no further than Joseph Fiennes' flowing ringlets - the best bad haircut since Princess Leia showed off her buns.