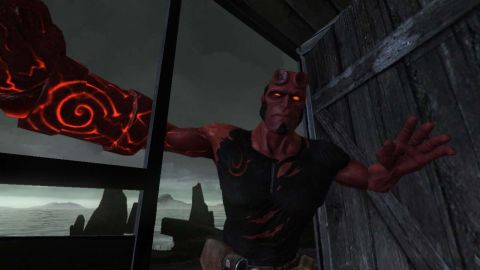 Granted, Hellboy is not a terribly sophisticated comic book character. His super powers are basically just that he's remarkably durable, kinda strong and has a stone hand he uses to punch things. Thus, even though his comics tend to have interesting characters and storylines (not to mention fantastic noir art), we didn't expect his games to be about riddles or gadgets or sorcerous cults or anything else that says "brainy" instead of "brawny". What we did expect was something other than Hellboy merely lumbering from one boring screen to the next, spamming bad guys who are all the same with two kinds of punches: hard and extra hard.

There's just not much here to latch onto. The fighting is despairingly monotonous - you have a gun to shoot, and fists that can wallop, throw junk, or execute a small handful of combos and finishing moves. But neither this weaksauce arsenal nor the few poorly realized boss battles you'll encounter are deep or interesting enough to keep you from wanting to tear your own head off when you meet your 200th group of the same uninspired (yet oddly durable) bad guys, whom you've got to pummel into unconsciousness to progress. To what? The next area full of bad guys, of course.

One would think that the other two playable characters, firebug hottie Liz Sherman and brainy aquabat Abe Sapien, could add some pizzazz and gameplay variety. However, there are two flaws to that theory: First, they don't. Forget what they can do in the comics; here, they're slap-fighters. And second, they're only playable during the split screen or online co-op modes. Suffering through this by yourself? You'll never get them. The graphics are fair, but like the fighting, they grow redundant too quickly, and the story couldn't get the game noticed even if it were drunk, topless, and the only woman in a bar full of sailors. Yes, you could technically do worse than this, because there's nothing functionally wrong with it (okay, maybe the fixed-position cameras). But you deserve better.