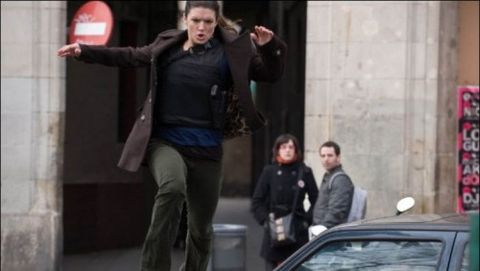 It isn’t Soderbergh at his most Oscar-fit ( Traffic ), artful ( Solaris ) or ambitious ( Che ), but it’s dispatched with the brusque style of his keenest genre cuts ( The Limey , Ocean’s Eleven ), sending a smarting message to action flyweights everywhere: you do it like this.

MMA fighter Carano hasn’t acted before. Deferred release dates gave Soderbergh time to knock out Contagion since shooting it. Worrying signs, both. But no scars of post-production panic are visible.

More crucially, Soderbergh bests earlier work with a non-actor ( The Girlfriend Experience ) by cleaving closely to Carano’s strengths: you’ll believe she can do more damage than Salt and Hanna combined.

Limey writer Lem Dobbs’ globe-trotting script is cavalier at best, crude at worst. But it doesn’t faff about, opening and closing with the same word and mincing few others in between.

But pared-back purity of purpose is Haywire ’s point – and it’s played with tough panache. By the time Kane reaches Ken, you’ll be too busy keeping up with the punches to fret over subtleties.