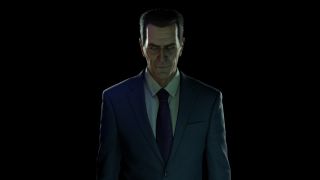 We've all had questions about Half-Life: Alyx, and thanks to Valve's recent Reddit AMA, we now have answers.

Several members of Valve's dev team jumped on Reddit earlier today to answer questions about the hotly anticipated VR title. The game, which is due out sometime in March of this year, was announced just a few months ago (last November), and curiosity has been at a fever pitch since. What's it about? How will it work? Is there a train?

The first thing we learned from the AMA is perhaps the most important: Half-Life: Alyx is complete. According to the AMA "with the exception of some tweaks to the absolute final scene, the game is done" and a lot of the team at Valve "have played through the entire game multiple times". The team is focusing on "polishing and fixing bugs, which is where we'd hope to be at this point in the development cycle" and is "confident we'll hit our intended release". Whatever that date may be, we at least know it's in March.

It looks like we'll be getting some gameplay videos in the near future, as one answer confirms the team is planning on dropping them in the "leadup to launch." Considering that's just two months away, it's safe to say we'll be seeing some gameplay videos soon. Expect "not just gameplay elements, but also VR-specific elements like different movement options".

Naturally, there were a lot of questions about the mechanics of VR and building a Half-Life game in that world. One user asked if the team had experimented with including players' arms or bodies in the game. It turns out they did experiment with arms, and they found that "players themselves don't notice them missing (spectators do, obviously) and they don't like them obscuring their view." There are "invisible" arms, however, "which connect from your hands back up to your HMD" which "detect impossible things, like completely closing a drawer over your wrist". Don't worry, if you're craving more details, there's plans to release a video that goes into detail about the technology behind the game's VR.

If you're worried about how much fear Half-Life: Alyx will instill in you, don't worry, you're not alone. Reddit user joelecamtar asked if the team were ever so scared or disgusted during playtests that they "had to remove the headset". Bless Valve's Tristan Reidford for giving us an honest answer: "I admit I cannot deal with headcrabs in general, and definitely not in VR. If I'm testing the game, and I'm in an area where I know one of those things is around, I'll remove the headset and hold it off my face as I attempt to navigate on the 2D monitor screen". He seems to be the only one who can't handle the game, however, and thinks it's fairly "accessible". My wimpy ass is happy about that.

The AMA itself was pretty long, spanning more than two hours, so there's a lot of juicy tidbits tucked away in there. For instance, the team doesn't think Half-Life: Alyx is all that tonally different from the other Half-Life games and map modification in VR is something the team has on their mind, but they're not "currently planning on shipping" a full Source 2 SDK.

If you want to read more from the Half-Life: Alyx AMA, including information about sound design, casting, and merch, click here.

And if you're in the mood, all Half-Life games are free on Steam for the next two months.