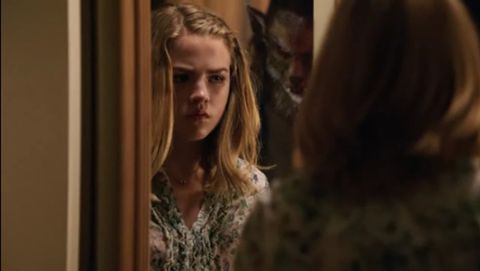 THE ONE WHERE Hank finally realises how Grimm life is in Portland when an old friend with supernatural origins of his own (played by genre stalwart Mark Pellegrino) comes to him for help finding his missing daughter. Meanwhile, Juliette has a Nick-shaped hole in her memory.

VERDICT After all the developments to some of the show's biggest mysteries in the first two episodes of the new season, this week we return to more of a monster-of-the-week format. Renard and his family problems are sidelined, Juliette remains in amnesiac limbo and Kelly and Adalind are still missing in action. Actually, this doesn't dampen spirits too much thanks to a solid performance from the always-watchable Pellegrino, and Hank finally realising he's not mad – the world as a whole is. The only thing that would make me happier is more Monroe. Still.

This is still fun, though, with the case-of-the-week a solid police procedural and some real emotional investment, courtesy of it being Hank's friends in danger. Juliette's amnesia is already a little tedious, and it's only been going an episode. Fingers crossed this is resolved sooner rather than later – whether that's with her getting her memory back, falling in love with Nick again or (my vote) Nick going the way of another Greenwalt hero and deciding that the best and safest thing he can do for the girl is to set her free. Discuss...

BEST BIT Hank has never been the most interesting of characters; at best during season one he was a sidekick who was oblivious to supernatural phenomena in a way not seen since the early days of Dana “the shape shifter is behind you” Scully. Seeing him come into his own in such dramatic fashion - turning his gun on his own goddaughter when she shows him her true coyotl form – is the highlight of the episode, and hopefully a turning point for Hank as a character. Though you have to pity the poor guy that his induction into this world included having to endure Nick’s rambling explanation (clearly Kelly's side of the family is where the articulate supernatural exposition comes from).

Russell Hornsby has been stuck with two-dimensional sidekick duty for too long, and he seems to relish his chance in the spotlight. It makes for a great episode and an interesting new dynamic for next week when – hopefully – we return to some of the bigger questions of mythology, as well as the potential fun of seeing how Monroe and Rosalee react to Hank being in on the secret.

BEST LINE:
Monroe [at the hospital with Nick, trying to jog Juliette's amnesia]: "That's assuming she's going to remember me, which I seriously don't think she wi…"
Juliette: “Monroe? What are you doing here?!”

Grimm season two airs in the UK on Watch, Mondays at 9pm