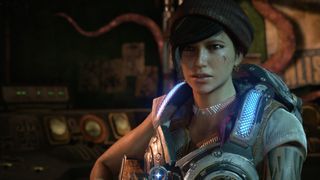 Gears of War’s Horde Mode, while brilliant (really, can you think of a more influential multiplayer invention of the last generation?) tends to suffer, by the very nature of its compulsive escalation, from a general degeneration of strategy in its final stages. It all starts out with the best of intentions, of course. Your team finds a nicely defensible spot on the map, divides up informal roles and general tactical plays, and then sets about executing, in all senses of the word.

But then things escalate, as is the point of Horde. And as the gratifying rollercoaster of just-made-it victories and last-ditch clutch saves keeps the squad in the game, things get progressively more anarchic, and play-styles more conservative to compensate. Lancers, grenades and nigh-endless huddling becoming the new order of the day. But what if there was a way to combine those two, distinct stages of Horde? What if strategy and purpose could, at least to some degree, stream through into the more oppressive, later stages of the game, when the skies rain with lead and simply breathing in too hard might see one choking on a bullet?

That's what Gears of War 4’s Horde 3.0 aims to deal with. And it does so not by radically changing things - although its key addition is fundamentally new - but rather by formalising the way Horde works, building an explicit framework of area control, base-defence, and co-operative squad roles around which compelling new systems and mechanics can grow. But crucially, it does so without dictating any specific flow or outcome of play. Your Horde run - importantly - is still yours to manufacture as you will, and fittingly it all starts with a device called the Fabricator.

Officially billed as a military-grade 3D printer - but in practice, ‘Magic box of stuff’ would also do - the Fabricator can be carried to anywhere on the battlefield and used to spawn defence items, weapon supplies, gun turrets, and more, entirely at will. As long as you have the currency to fuel it.

That currency comes in the form of Power, which you’ll collect from the bodies of dead enemies. Presumably the Swarm all carry multipacks of batteries around with them. Maybe they’re rocking Sega Game Gears for the downtime between brutal, surface-side invasions. The snag is that you need to physically deliver it to the Fabricator, and can only manufacture new stuff at the Fabricator. And then you have to manually place it on the battlefield by trekking around on foot. Here’s where the first - and possibly most fundamental - layer of strategy comes in.

You’re going to have to start thinking about your perimeter immediately. The Fabricator is obviously going to be at the core of your base, but how big do you want that base to be? Too small, and if you get over-run you’re going to find things really cramped and decidedly fatal within a very small window of time. Go too big, and while you’ll have an easier time of keeping the enemy at bay, albeit with a much wider front to cover, you’ll have a nightmare of a time ferrying Power back and getting fortifications set up before the next wave starts.

And as in all the best strategic games, this first layer immediately spirals out into many more, because your base philosophy will immediately inform your play style, and the class make-up of your squad. (by the way, there are classes now.) If you go big, then you might want a team with more sniper units than usual, in order to take some pressure off your closer-range soldiers and scouts. But that in itself that leaves you less well represented on the frontline. And if snipers are a key part of your game plan, you’ll need to keep them supplied. They can’t exactly go running out into the fray to pick up - ammo drops tend only to happen in the eye of the storm - so you’ll need to build a weapon locker.

Weapon lockers are great. Once you manufacture one, it will hold four guns, meaning that you can save any collected power-weapons for later in the game, when the waves get serious. It will also replenish the ammo of any gun you put in it, making it a vital resource for keeping snipers going. But if you place it at the back for exactly that purpose, then your direct assault players will have a heck of a trek back to load up when things do get serious.

As for those frontline guys, soldiers and scouts will be your key players. The former get damage and reload buffs, where the latter get bonus defence and double Power whenever they collect. Those scouts are your noble battlefield foragers, and will be key to keeping the Fabricator running. That’s great, but it also means every unit of Power collected by another unit is effectively wasted, its potential halved. And it might sound straightforward to have everyone else hold off so that the scouts can hoover up at the end of a wave, but as things go on, that time limit is going to be an ever more pressing factor. How do you reconcile the need to maximise Power with the need to just get some Power into the Fabricator and get things built and repaired before the onslaught begins again?

Similarly with building in the first place. Do you let your engineers - who get discounts and a free repair tool - construct everything, or just go with whoever can do it fastest? In Horde 3.0, you’re always waging two battles at the same time, the obvious one against the ever-growing enemy, and the strategic meta-battle of how to best conduct the fight in order to keep your resources functioning amid escalating pressure and increasingly stretched facilities.

But far from tearing the team apart with stress and recrimination, Horde 3.0’s set-up, in practice, only seems to bond players in the most glorious, giddy, panic-stricken camaraderie. Having distinct roles is an immediate psychological game-changer, instantly hammering out any temptation to lone-wolf it with an ambient but over-riding sense of ‘this is for the team’. The feeling of being an important part (a cog?) of a machine has never been greater. And every part really does feel important. There’s no longer any guilt for not having the top kill-count, or any sense that anyone might be the best player, whatever the scoreboard says in numbers.

As a sniper, I might not overfill the cemetery, but if I know that the kills I did get stopped those five heavy Boomshot units from getting out of the spawn area, then I nailed it. As a scout, I might have let our soldier and heavy take down the majority of Swarm, but I’m the reason those kills really counted, thank to my maximising their Power drops. As an engineer, I might not get any kills at all, but by maintaining our Rube-Goldberg run of traps, barbed wire, turrets and ammo dispensers, I know that the win is absolutely mine.

And don’t discount the importance - and fun - of getting creative with that item placement. As with everything in Horde 3.0, its execution will depend on how well you manage your resources - both currency and time - but pitch your building schedule right (it’s a desperate knife-edge between saving up during the earlier, more relaxed rounds, and building quick before things get unmanageable), and you can have the arena do half the work for you.

Barbed wire on high-traffic paths and through choke-points will soften up the enemy early (though distant placement will make maintenance tricky), and possibly funnel the opposition along preferred routes. Manual turrets and more expensive, automated sentry guns can meet the incoming threat along the way, or set up cross-fires at busy intersections. Tesla turrets will do fast, directed electrical damage, but until you upgrade them (provided you can afford to), they’ll be specific in their targets, meaning careful placement and a degree of luck will be vital.

Get it right though, and your construction efforts will feed directly into the fun, beyond the logistics of damage dealing. During one run, my team’s steadfast turret did such a good job that it became an unofficial, sixth member of the squad, each of its five human compatriots verbally praising and congratulating it at the end of every round, all the way up to wave 30. We bonded around that turret, and keeping it repaired rapidly became as strategically and emotionally important as reviving any fleshy teammate.

So Horde 3.0 is great fun. It will still get crazy as things progress, and the infectious sense of barely controlled anarchy remains as potent as ever. But this time you’ll have a greater sense of ownership. A greater bond as a team. Whenever and however things get ludicrous, you’ll know that you’re at least partially responsible, the wins your achievement and the losses your fault. Both eventualities are equally energising, but more excitingly, the new tools of customisation and dynamic strategy in play ensure that whatever happens, your team can immediately respond and adapt. And you never know, you might just make best friends with a turret along the way. I can’t tell you how good it is to have a turret bestie.