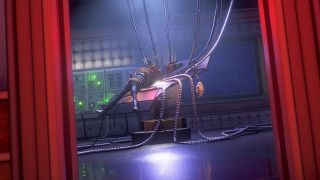 Gearbox just  teased what's very likely the long-awaited reveal of Borderlands 3 at PAX East, and now it's drumming up excitement for a whole other project. The company's official Twitter account kicked off the speculation with an odd image that seems to show some kind of partially assembled automaton, all splayed out and hooked up in a mysterious laboratory.

Time to tease another game for PAX! pic.twitter.com/N6OQIUZnAcMarch 13, 2019

The Tweet says "Time to tease another game for PAX!" so this isn't another Borderlands 3 tease. The subject material doesn't line up with the Borderlands aesthetic, with no post-apocalyptic graffiti or cel-shaded desert scenes to be seen. It could be a teaser for Project 1v1, the online card game/shooter hybrid Gearbox debuted last year, but the retro sci-fi look doesn't line up with 1v1's high-tech style.

I can tell you one thing: whatever game it is that Gearbox is teasing here, it's for sure going to involve robots. The official Gearbox Twitter account's replies section is filled with a dizzying array of robot reaction gifs for every situation right now.

Even the official Apex Legends Twitter account caught on and replied with a gif of its own large robot son.

PAX East is set to begin on March 28, which is also the day Gearbox tapped for the presumed Borderlands 3 reveal. Unless Gearbox wants to space out its big announcements - which is pretty rare, usually the big PAX news happens as soon as the event begins or even days before - we'll probably hear about whatever this robo-game is then too.

Sounds like we're going to have a lot to add to our list of the biggest new games 2019 pretty soon.