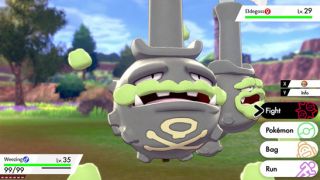 The latest Galar research update trailer for Pokemon Sword and Shield went live yesterday and introduced us to four new Galarian forms, and the designs of the new additions got everyone talking. If you’re a self proclaimed Poke Fan like me, you’ll surely remember all the buzz around the extremely tall Alolan Exeggcutor. Well, the Galarian forms are already earning themselves a lot of love, and, more importantly, producing some quality memes.

If you missed the trailer, we were introduced to some new shapeshifting Pokemon, a group of villains called Team Yell, new rivals, and of course the new Galarian forms. It was also revealed that Sword and Shield will have a new Pokejobs feature. But far and away the new Galarian forms were one of the biggest talking points of the whole thing.

Folks had a lot to say about the new forms. While some are divided on just what Galarian Weezing looks like -  from a bong to the most sophisticated gent in the Pokemon world - the general consensus is that everyone absolutely loves it. And it was much the same story for the angsty, punky Zigzagoon, Linoone and Obstagoon evolutions, with many, many comparisons made to the KISS band. With all the fanart and memes galore, one things for sure: there's a lot of love for the designs of the Pokemon unique to the Galar region.

I already love Galar Forms. Please give us more crazy shit like this pic.twitter.com/u6EKktiMUgAugust 7, 2019

Everything is forgiven, Galarian Weezing is literally the greatest thing in the world ever, and I will fight anybody who wants to hurt him. pic.twitter.com/gJjUj10qm1August 7, 2019

The new Galarian Zigzagoon line are literally the rock band KISS. You can’t make this shit up and I love it! #PokemonSwordShield #Pokemon pic.twitter.com/YKcmfKyPZ3August 7, 2019

Is it a bong? Is it a smokestack? Is it Doug Dimmadome? No, it's Galarian Weezing!

Okay, so I personally think Galarian Weezing is a classy gent of a Pokemon with a Smokestack that doubles as a top hat (which nods to the industrial revolution). I can just see it tipping its hat to passersby as it sips tea. A big part of the internet agrees me, but there's also a lot of people who just see a bong. Oh, and Doug Dimmadome from Fairly Odd Parents. However you see it, we can all agree that Weezing's design stole the entire trailer.

When Koffing becomes Galarian Weezing, is it called an Industrial Evolution? #PokemonSwordShield pic.twitter.com/K09XguaU06August 7, 2019

I hope Galarian Koffing will have like a tiny Bowler hat sorta deal that evolves into a top hat for Weezing pic.twitter.com/lYM26I22ZEAugust 7, 2019

the pokemon company, crying: GALARIAN WEEZING IS NOT A BONGAugust 7, 2019

As you can already see from the above posts, the Galarian forms got a lot of love yesterday, and artists everywhere made some amazing fanart to express their fondness for the new designs.

The Galarian forms have already stolen our hearts and we can't wait to see what else in store in the new region when Sword and Shield releases November 15, 2019. The possibilities are endless.

Want to know more? Check our round up of all the Gen 8 Pokemon that have been revealed so far.