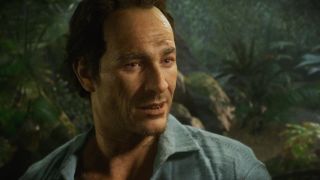 Brotherly love. Ain’t it swell? Just look at Nathan Drake and his older sibling Sam. They finish each other’s quips. They intimately snap mens’ necks in tandem. They toast their good health in a centuries-old bar in the heart of Libertalia. Their blood-bonded bromance truly warms the cockles. Had Uncharted 4 stuck to its original course, however, Sammy boy would likely have been Nate’s nemesis.

Say wha’? That’s right. Cast a beady peeper over A Thief’s End’s teaser trailer – released back in the quaint old days of November 2013 – and you witness a flash of a decidedly less chilled Sam. “Some chains can never be broken,” hisses the narrator. “I lost 15 years. Buried alive. Erased. You left me rotting in that hell hole and never looked back.” Over a decade wasting away in a pee-pee soaked heck hole, you say? That sure sounds like a certain denim jacket-loving, chain smoker’s time in a Panamanian pokey.

Now, a whole lot changed between that trailer and Uncharted 4’s release. Long-time series director Amy Hennig left Naughty Dog in March 2014 – replaced by The Last Of Us’ chief collaborators Neil Druckmann and Bruce Straley. Next, the voice of that teasing vid, actor Todd Stashwick, revealed his role had been recast. While it was never officially confirmed he was playing Sam, it doesn’t take a Baker Street-residing detective to work out his role based on that narration.

And boy are original Sam’s words bitter, too. “You can’t outrun the past... and when it catches up, when all your lies collapse around you, I’ll be there, sifting through the wreckage. You owe me.” Why the eventual change in tone? My guess is Druckmann and Straley softened Sam so that he could act as an AI partner – Uncharted 4 is drenched with TLOU’s DNA, after all.

Still, imagine narrator Sam going after Drake, an unhinged sibling ruined by resentment, who blackmails our hero into pursuing Henry Avery’s treasure. Forget Rafe and Nadine, Sam Drake 1.0 would have been the ultimate baddie – one driven by deliciously malevolent motivation. Part of me will always pine for that never seen, bitter big bro.