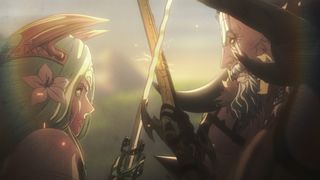 Last night I completed precisely one hour of Fire Emblem: Three Houses in five hours of game time. During this extended stretch of seconds, I tried to trick a green-haired girl into believing that I might legitimately be a ghost, I was briefly introduced to a cast of impossibly handsome heroes, and I beat the shit out of a couple of bandits – my finger hovering over the Switch's power button should any of them fall in battle (yes, I'm one of those, and no I will never change). That took all of 60 minutes. I spent the other four hours with my eyes glued to a single frame, paralysed.

Fire Emblem: Three Houses forces you to make a big decision early on. The titular houses need your tutelage, but you can only pour your time, energy, and attention into one of them. And so you must make a critical choice at an early-game fork in the road, one that will no doubt affect the entirety of the experience ahead with very little information provided to help inform your decision. My anxiety spiking as I weigh up the risk/reward of turning to the internet for answers: the risk, ruining an entire pathway of the game because Reddit and Twitter can't keep spoilers in its pants; the reward, moving on from this god damned screen and getting to play the rest of a game that I was otherwise excited for. I'm already stuck on Fire Emblem: Three Houses, and I already know that this is all going to end in tears.

There's this one turn of phrase in Faith No More's seminal party-banger 'Falling To Pieces' that I've always seen – for better or for worse – as a true reflection of my character: "Indecision clouds my vision". It's a great line, and you're just going to have to imagine the specific vocal inflection that maestro Mike Patton places on it to get the full effect. I know, I'm getting off-topic. What I'm trying to tell you is that I have always been grossly indecisive. Over the years, video games have exacerbated this beyond belief.

I became so competent at running through the Alliance starting areas at a record pace during the World of Warcraft episode that almost railroaded my younger years that I had nearly convinced myself that there was no game to be found beyond level 20. I was a forever hostage at the Lion's Pride Inn of Goldshire; a flower child of the Elwynn Forest; and a true friend to the Kobold. I ended up running a human mage for 10 years. Not because I wanted to, but because it was the first character I ever created in the game and attempting to roll anything else after the release of Wrath of the Lich King would have been to invite a chaotic evil into my life that I could not control. Video games have a real problem with asking too much of you too early, and I can't cope with it.

You're looking at the guy that – over the 12 months contained within 2003 – would routinely start a new save on Star Wars: Knights of the Old Republic, become transfixed by the class select screen for a few hours, make a decision, get down to the Undercity of Tarris, be all-consumed with regret, and ultimately be forced to start the game over from scratch. It took me five years to complete that bloody game, and I'm still not convinced that I ever chose correctly between Soldier, Scout, and Scoundrel.

The same goes for The Elder Scrolls 4: Oblivion, as having to choose a race, birth sign, and class all while Patrick Stewart – disfigured by the early advancements of the HD-era – prattles on at you about nobility five minutes into the game was far too much for me to deal with. Then there's Fallout 3, and I'm on the frontlines advocating for the S.P.E.C.I.A.L. system of education and job determination to be outlawed entirely – that's far too much pressure to put on the shoulders of a young vault-dwelling child. Oh, and don't even get me started on the Telltale games. "Clementine will remember that", oh will she now? Just put a gun to my goddamn head already.

All sorts of video games ruined, and all because I have a tendency to let indecision cloud my vision. And here is Fire Emblem: Three Houses, a game that's asking me to pledge allegiance to one of three flags within minutes of discovering that they even existed. It doesn't state this explicitly, but I just know that this will affect everything from available unit types to potential relationships, to the way that entire story pathways are framed and unfurl throughout the adventure. Why a 60-hour RPG asks you to define the direction of the experience after just 60 minutes I will never understand.

Trapped in a cycle

So here I am, with Fire Emblem: Three Houses locked to a single screen and a big decision to make. Do I go and hang out with the chill stoners, fun but ultimately frivolous; do I roll with the nerds, kind-hearted and kind of boring; or do I slink off into the shadows with the goths, mysterious with a shade of attractive pretension. I can't make this decision. I couldn't make it when I was 14, desperately splitting my time incoherently between the fringes of three friend groups IRL – let me tell you, my long hair, the sarcastic attitude, matched with the dark clothing peppered with pockets of audacious colour was not a good look – and I can't make it now either, aged 29, as I'm forced to choose between integrating myself with one of three virtual friend groups that I haven't been properly introduced to yet.

For now, I'll do what I always do: choose the group with the most excellent looking hair (the goths, obviously), I'll change my mind immediately, and cross my fingers that I'm not reaching for the reset button once again this time tomorrow (spoiler alert: I will be). Friends, Fire Emblem: Three Houses looks bloody incredible, but in committing the cardinal sin of so many RPGs – of forcing you to make big commitments too early in the relationship – I just know that I'll be back on familiar ground before long, wondering whether I've made a massive mistake before stumbling back to the starting block to make it all over again.

Still, becoming locked in a cycle of continually restarting Fire Emblem: Three Heroes can't be worse than some of the indiscretions indecision has caused me to commit in the past. You know, like that time I convinced myself that showing up to a house party hosted by a bunch of goth kids while sporting white-guy dreadlocks, cherry red Dr. Martens boots, an Iron Maiden tee, and a colourful cardigan was anything close to a good idea. Man, thank the lords' nobody found out about that one, eh?