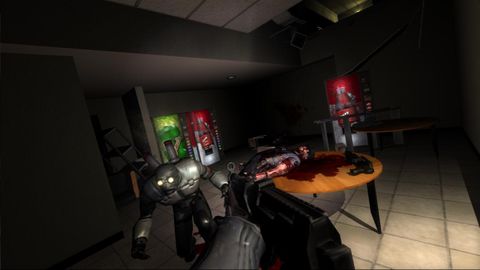 What's the point of a shooting game? Shooting things! It's weird, then, how many first-person shooters are content to settle for positively wimpy gun mechanics, with rifles that sound like pea-shooters and machine guns that take three boxes of ammo to down a small mammal. If it's not fun to shoot, what's the point? Make an RPG or something. It's much more interesting to play games in which your shotgun's barrels emit deep rumbles, bullets palpably smash into bodies and where flying gore is second only to flying lead.

Gun fetishists, it's time to put down your worn-out copy of Black, because we have just such a game in F.E.A.R. A faithful port of the 2005 PC hardware hog, F.E.A.R. feels right at home on the 360 and delivers a brief but dense dose of highly kinetic, super-frenetic gunplay.

Sure, it has some pretensions of telling a story, but it's pretty forgettable S.W.A.T. versus supernatural stuff, and the lack of subtitles can make it tricky to follow the dialogue anyway. That's okay, though, because this puts the focus exactly where it should be: on the spectacular, slow-motion firefights. F.E.A.R. features the most realistic and interesting opponents since the original Half-Life, and it's thrilling to match wits - and lead - with these guys. In most games you out-dumb the computer; in F.E.A.R., you feel like you outsmart them. And then you get to shoot 'em, which is a very fun reward.