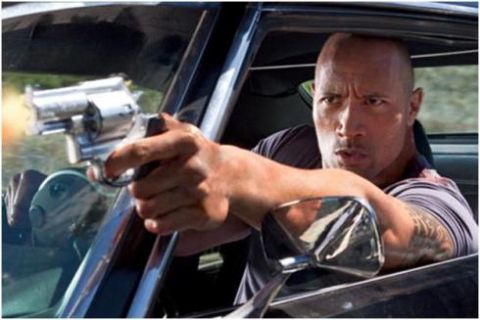 Which makes him an odd choice to revitalise Dwayne ‘The Rock’ Johnson’s reputation as an action bruiser after a run of sugary fare.

Luckily, both director and star follow the blueprint of all the second-tier ’70s revenge-thrillers that Faster bases itself on, offering up a teeth-gritting, eye-gouging, retro-fitted kill-fest that all but erases memories of Johnson in a tutu in Tooth Fairy.

Like Death Wish and Vanishing Point, two of Faster’s more obvious inspirations, the plot is superbly simple: a muscle-bound, murder-minded bank robber (Johnson) finishes a 10-year stint in the slammer.

Immediately upon release, he hits the road with a list of people to kill, both to avenge his dead brother and to settle various outlaw-type scores.

Johnson’s hotly pursued by a cold-hearted contract killer (Oliver Jackson-Cohen) and a loony veteran cop (Billy Bob Thornton). Bar a couple of fun twists, that pretty much covers it.

Although they’re all indebted to some other film, there are some nice touches here. as in Walter hill’s stripped-down The Driver, no one has names, just occupations: driver, Prison guard, cop, Killer.

Unfortunately, all these cinematic riffs eventually make Faster feel like a pastiche of other, better movies.

Still, it’s a welcome return to mayhem for Johnson, with enough car crashes and head smashes to sate most action junkies.