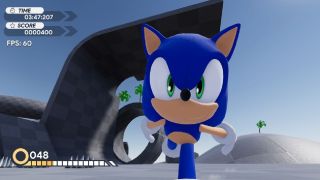 Sonic Project Hero is a fan-made 3D game from developer Hero that's based on the Unity Engine. A demo for it debuted in October 2019 and just last month other fans rebuilt an entire Sonic Unleashed level within it. It's all very Sonic Inception. Check out the video below.

YouTube user Beatz rebuilt the Windmill Isle map from Sonic Unleashed, complete with slow-rotating windmills, glittering oceans, and craggy isles. It's absolutely gorgeous, and a dream to watch play out, as the soothing music almost hypnotizes you as you watch Sonic spin and sprint.

The original game build, Sonic Project Hero, seeks to show off an understanding of momentum-based gameplay and platforming that the developers believe is missing in contemporary 3D Sonic games. There's no "boost" so it plays more like Sonic Adventure with lightning fast moments and "smooth mobility in every aspect with a Spin Dash, bounce, wall-jumps, Light Dash, and Homing Attack." The game has been well-reviewed by Sonic fans, and this level rebuild is a great addition to a great passion project. You can even play Sonic Project Hero as either Tails or Knuckles!

Sonic Project Hero's demo dropped for PC and Mac during the Sonic Amateur Games Expo with a single level - a massive, Sonic skatepark with loop-de-loops, rings, enemies, and more. Since then fans have enjoyed modding the Unity game, as you can see in the video above.

Why not prepare for the Sonic movie with everything we know about the film?