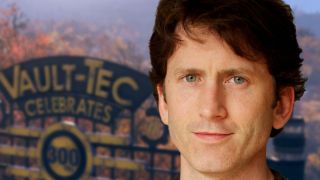 Maybe you're excited to check out the West Virginian wasteland with friends in Fallout 76, or maybe you think Bethesda should throw the whole thing out and stick to single-player RPGs from now on. Either way, Bethesda Game Studios boss Todd Howard just made one of the most convincing and succinct arguments for bringing the Fallout universe, and his own studio, online in an interview with The Guardian.

First: yes, The Elder Scrolls Online already exists. But that was chiefly made by the team at ZeniMax Online Studios, another wholly owned Bethesda Softworks company, not the open-world RPG tastemakers at Bethesda Game Studios. And BGS has actually been considering making some online Fallout of its own since around the time TESO came out in 2014 - Howard said Fallout 76 is a continuation of an unused multiplayer idea for Fallout 4! Now back to the main question: as a developer renowned for making single-player, system-driven RPGs, why is BGS making an online game?

“I usually find in our games, the best moments aren’t the ones that we designed,” Howard said. “They’re when you’re out in the open world and different systems collide. Putting that power in the hands of the players exponentially increases the number of different magic moments that can happen in the game.

“Some other games out there have done a little bit of that, but not in the way we wanted to do it. Fallout 76 is a mix of what you’d expect of us - there’s an open world, with our kinds of quests, and you do have a goal - but then you don’t know what’s gonna happen when you run into somebody else. That interested us greatly from a design-mood standpoint.”

If you think of other BGS games like Fallout 4 and Skyrim as chemistry sets, with a bunch of elements that get unexpectedly mixed up as a result of your actions… then adding a few dozen other players is like, well, adding a bunch of other people haphazardly mixing chemicals around. In other words, it boosts the chances for that good old Weird Bethesda stuff to start foaming up and potentially exploding Yes, there will be bizarre bugs, and they will be hilarious. Mostly.

Hopefully it all goes well, if not according to plan (I can't see how "BGS RPG" plus "online" could possibly go according to plan). And while Howard sees a lot of potential in adapting his studio's usual open-world RPG formula to multiplayer, he doesn't think it will become the norm.

"We want to be careful with our fans and other people who ask, ‘Is this what Fallout is forever now?’ It’s clearly not. It’s definitely its own thing,” he said. “We had the idea, and for a while now we’ve been thinking we should try it ... we are sometimes afraid of doing it, as much as our fans are afraid of us doing it. But we’ve got to try new things.”

Take a look at the Fallout 76 map as plotted out by fans for more insight into the game.