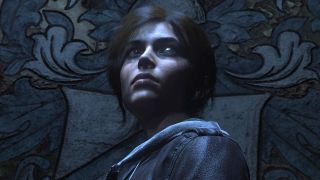 Graphically, Croft Manor never looked so good - but structurally, it's falling apart. Lara Croft's dilapidated childhood home is the setting for Blood Ties, the cornerstone of the final wave of DLC for Lara's latest adventure (alongside the zombie horde mode of Lara's Nightmare and the two-player survival of co-op Endurance). And with Rise of the Tomb Raider: 20 Year Celebration set to make its PS4 debut on October 11th, Blood Ties bears a canny link to the PlayStation VR headset which launches that same week. The 20 Year Celebration edition includes all the previously released DLC, as seen from the standard third-person perspective - but you can enjoy the entirety of Blood Ties in VR, an experience that acts as the perfect gateway to the platform and sets a standard for what other developers could do with their iconic franchises.

Blood Ties doesn't incorporate the usual tenants of the new Tomb Raider timeline, where Lara's arrowing goons or dashing through crumbling temples to reach priceless artifacts. Taking place after the events of Rise of the Tomb Raider, Blood Ties follows Lara as she explores Croft Manor in search of evidence that she is the rightful heir to the estate, which her Uncle Atlas is threatening to usurp (reading one piece of seething correspondence from Atlas is all it takes to loathe this nasty old relative). Blood Ties is a quieter, more methodically paced affair, clocking in at around an hour of content and focused purely on exploration and stress-free puzzle solving, without any combat or chasm-leaps to speak of. That relaxed atmosphere makes it ideal for players who want to experience PSVR alongside (or in this case, as) a hero they already know, in a reimagined version of a setting they might've already seen.

"The Manor was something that we've always wanted to see come back as a part of Lara's character growth," says Noah Hughes, franchise creative director at Crystal Dynamics. "As is often the case with bringing things back, we'll look at classic Core [Design, the originator of the series], we'll look at the Legend/Anniversary/Underworld era from Crystal, we'll even look at the movies a little bit. I think people will see glimpses of Manors past." While previous games have showcased Croft Manor in cutscenes or let you explore the grounds, Blood Ties' version is the first time we've seen it in such a state of disrepair, where ancient artifacts and suits of armor stand among crumbling wood architecture and bits of abandoned construction.

Blood Ties hits all the right beats when it comes to VR immersion. As I gaze around the spacious study, which looks particularly creepy on a stormy night like this one, I'm stricken by a superb sense of place. Leaning forward to peer over a second-story banister triggers a heady bit of vertigo, and I nearly flinch when looking up at holes in the ceiling as drops of rain fall toward my face. The greatest illusion of all was when I walked into a room where a fallen tree had smashed through the mansion walls, and my brain was certain that I suddenly felt a cold draft from the pouring rain outside. Fortunately, the movement options should make any player comfortable: the less motion-sick-prone among us can opt into the classic control scheme if their stomach can handle it, but you're always dropped into Comfort Mode first, where holding L2 projects an icon of Lara ahead of you (with can be turned with the right stick), R2 teleports you to that spot, and L1/R1 let you snap-turn your view with a gentle blinking animation.

But the sense of immersion is also strengthened by the fact that the world feels so invitingly familiar. There's a certain comfort to exploring a game engine that you've gazed at for hours on a regular screen, and Rise of the Tomb Raider's graphics are already gorgeous to begin with. It's also great getting more insight into Lara's childhood, and all the ways her late father encouraged her spirit of adventure from an early age. As you explore the Manor, you can examine objects that conjure up Lara's memories, letting you hear the recollection of her younger self before present-day Lara reflects on her reminiscing.

It's adorable hearing a little Lara eagerly ask "Does this mean I'm your research assistant?" when helping her father decrypt Egyptian hieroglyphics; it's equally heartening listening to a recording of Richard Croft as he crafts "a clever little map for Lara's birthday expedition" with invisible ink, fostering the kind of curiosity that would later serve Lara well. On top of the backstory bits, you'll also find charming references throughout the Manor, like a stuffed dinosaur next to a cute crayon drawing of a tiger - memorabilia from Lara's youth that references the exotic creatures that attacked her in the original game.

If there's anything missing from the VR version of Blood Ties, it's Lara herself; the sense of a character's presence that's naturally reinforced in third-person. "It definitely adds a lot to have Lara onscreen, so sometimes you miss her just in terms of Lara's animation and expression," says Hughes. "But other than that, the game's been translated [into VR] fairly well." And though you'll only be able to hear Lara during your forays into the many halls of Croft Manor, the cutscenes let you get a closer look at her in VR, where you become an outside observer within the cinematic in place of the usual framed shot you'll see during a third-person playthrough. "You can even lean in - it's weird, actually. The first time I was like 'Oh, wait a minute! Cinematics are totally different when I can look around!'" laughs Hughes.

I think it's incredibly intelligent that Crystal Dynamics has tailored Blood Ties to perfectly accommodate PSVR. Truly satisfying combat and platforming feels like it has yet to be cracked at this point in VR's growing pains, so eschewing those elements for a narrative-driven mystery feels like the ideal way to go - at least for right now. "I think one of the challenges is the camera," says Hughes. "It's not so much that you can't do certain actions with Lara, it's just some amount of being respectful of how smooth we can make the camera through that experience, to be as immersive and comfortable as possible."

Blood Ties feels like an ideal taste of VR, as more players are introduced to this fledgling tech and the immersion it can provide. Like being the Dark Knight in the similarly excellent Batman: Arkham VR, being able to view the world through Lara Croft's eyes and hear her thoughts brings you that much closer to a universe you already know and love. Refined combat and platforming can come later - in VR's infancy, it's these kinds of leisurely, deeply personal experiences with established characters that can entice and enthrall the mainstream. Just imagine other studios following Crystal Dynamics' example: sitting in the mess hall with your Mass Effect shipmates, or standing at street level with your gang in Yakuza. Blood Ties could be the perfect dose of VR inside an established franchise, and will hopefully inspire the kinds of sampler-sized VR excursions that bring beloved characters to life in ways you can't experience anywhere else.