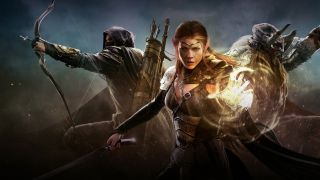 Spare a thought for the youngest offspring of Todd Howard, the director of Bethesda Game Studios. Despite his family connections and his love for The Elder Scrolls 5: Skyrim, even he can't get any answers on the studios super anticipated Elder Scrolls 6.

"He's like, 'OK, when is Elder Scrolls 6 coming?’" Howard says, relaying a conversation with his son. "And I’m like, ‘I’m not gonna talk about that right now either.' He’s like, 'Can I give you my ideas? Can I work on it? Come on, tell me a few things, I’m not going to tell anybody.'"

"I’m like, 'Well, you might, so I’m not gonna say anything.' But it's great - I think a lot of kids want to get into video games. If you’re a creator, I kinda want my own sons to find their own way, as opposed to, ‘Yes, you should absolutely make games.’"

Todd Howard shared the anecdote on a recent edition of the Academy of Interactive Arts & Sciences podcast, The AIAS Game Maker's Notebook, as spotted by Kotaku.

Really, the only thing we can be sure about regarding The Elder Scrolls 6 is that you've still got some time to wait before you'll be playing it. Like a "how much does it cost to get myself cryogenically frozen for two years" sort of wait. The overlord of all Bethesda's marketing and communications even tweeted in February that we can expect two other big titles to get to us before Elder Scrolls 6.

At least we have Elder Scrolls Online to keep our little adventuring hearts from breaking.