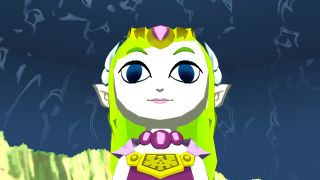 I didn't finish The Legend of Zelda: The Wind Waker the first time I played it, and for years I was left idly curious about the sunken kingdom of Hyrule. You can see just enough from behind the barrier that traps you in the castle to wonder what it's like on the other side, this ancient kingdom frozen in time beneath the waves. Soaring around the map on noclip.website, I finally explored the ruins and hollows that held captive my 13-year-old imagination.

The name is unromantic but accurate: noclip.website lets you load environments from games like The Wind Waker, Super Mario Galaxy, and Banjo-Kazooie in your browser. Then you can explore them freely as a floating, disembodied observer who passes through the walls that once constrained you (or "clipping" through them in game development jargon).

Here's the full list of currently included games, not counting those that are still in the "experimental" section and thus a bit too glitchy to comfortably explore. They tend toward older and/or handheld games, but there are a few big and modern ones in there too.

Each game has a list of maps to load up and look through. I recommend fellow Nintendo Kids start by loading up Hyrule Field from Ocarina of Time. The 3DS version has updated graphics but they're still dated enough to set off N64-tuned nostalgia sensors. Once you've familiarized yourself with the controls (click the question mark button for a guide) step up to Wind Waker's Great Sea. It's beautiful; so vast from the sandy shores of Outset Island yet so small from high above the Tower of the Gods. Then, if you were curious like 13-year-old me, go back to Hyrule. The one you never got to see all that much of even if you finished Wind Waker.

It turned out sunken Hyrule's vastness was remote and untouchable, all of it a backdrop for one narrow path forward. Seems like the blurry, half-textured world laid bare without context or comment by noclip.website should be a disappointment, but it's not. It's exactly what I wanted to see.

Find more to explore in our list of the best open-world games.