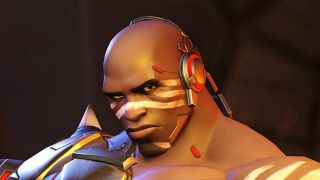 Overwatch fans, the day you've waited for has arrived: Doomfist is live on the Public Test Realm (PTR), and a new story trailer showing off the highly-anticipated villain's backstory is also available for your viewing pleasure. In fact, let's watch his introduction to the Overwatch world right now:

Game director Jeff Kaplan also has a breakdown of Doomfist's role, as well as explanations for each of his abilities (Rocket Punch in particular seems pretty nasty):

While he seems like a fun character to play, fans who take an interest in the Overwatch meta-narrative are feeling a bit let down. Actor Terry Crews said he was interested in voicing the character earlier this year, and even visited Blizzard HQ. Twitter in particular was in favor of this idea, and it's not hard to find people who are let down that Crews won't be voicing the character after all.

Doomfist is not being voiced by Terry Crews and somebody at Blizzard needs to be fired for thatJuly 6, 2017

Oh well. Maybe Crews can still voice a different hero, or even take over Doomfist as a Legendary skin. Who knows? In the meantime, the important thing is that he's fun to play. Why not log on and give him a spin if you can?

For those without access to the PTR, get caught up on this week's Overwatch news and make sure you claim those free loot boxes that you get for linking Twitch Prime.