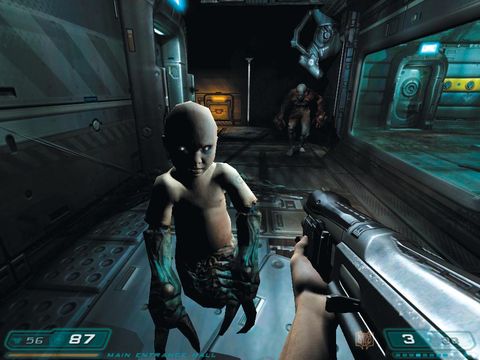 Who would have thought that anything bad could happen from mixing the occult and ancient alien technology? It's up to you, Space Marine, to thwart the invasion from a Hell dimension that has started on a Mars research station and threatens to spread to Earth.

There's no disputing that Doom 3 has some of the prettiest graphics ever on the PC, showing some of the ugliest monsters ever to throw fireballs at your head. The creatures that stalk you in the darkness are pretty terrifying if you hold still long enough to get a good look, though by that time they've probably taken a bite out of you. And you won't want to pause often: the fast and furious, shoot-everything-that-moves, kill-or-be-killed frenzy of bullets, blood, and demons is a shooter in its purest, most refined form

Nothing is as scary as what you can't see. The levels are dark to a fault, forcing you to switch from your gun to a flashlight in some areas just to see when you’re about to be attacked. Of course, that means that when you are attacked, you're unarmed and vulnerable for a moment as you switch back to your Hummer-sized gun and open fire. Love it or hate it, it's a novel trick that helps distinguish Doom 3 from every shooter clone that has come in the past decade. The sensation you get from playing is best compared to a sci-fi horror movie like Aliens, and it is an experience that is definitely best enjoyed in a dark room with the surround sound cranked up.