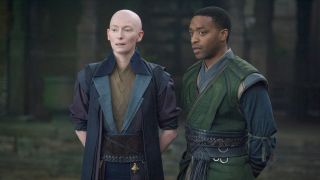 One of the recurring criticisms of the Marvel Cinematic Universe is why heroes don't help each other out more often. Indeed, the latest trailer for Doctor Strange even goes so far as to name-drop the Avengers, proving that the extremely powerful sorcerers of Kamar-Taj are very much aware of Iron Man & co's world-saving activities. So where have they been all this time?

"There are people inhabiting the same world that are stopping buildings from falling down, robots from doing this, aliens from doing that", Kevin Feige explained to Collider. "These people in this movie are stopping inter-dimensional forces from wiping out all of reality".

"So although it doesn’t necessarily come up we’ve always assumed that the sorcerers have bigger fish to fry when they hear there’s something in a city  or there’s a bank being robbed. They’re not thinking about it. They’re thinking if we don’t keep vigilant our sense of reality will disappear, and there won’t be a bank to rob and there won’t be a city to be conquered".

That means we probably shouldn't expect many cameos from Doctor Strange in future MCU movies (Thor: Ragnarok notwithstanding): "I don’t think he does a lot of hanging out, necessarily. No, he usually gets involved when – as I said, he’s not going to intervene in the bodega crime down the street. But as things get bigger and as threats get bigger he can serve a very good purpose and can make his presence known".

This is the tricky catch 22 of the MCU; on the one hand we want these films to be self-contained stories, and on the other it feels weird when the President is kidnapped by a terrorist and only Tony Stark is showing up to save the day. On the whole though, I think Marvel have done a pretty good job of delineating their heroes' various territories - the Netflix heroes take care of their cities, the Avengers safeguard Earth, and the Guardians defend their corner of the galaxy - and Doctor Strange's introduction shouldn't upset that intricate tapestry.