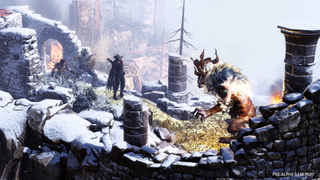 Larian Studios has been making Divinity RPGs for nearly two decades, since the tautologically titled Divine Divinity in 2002 up to its most recent instalment, the celebrated Divinity: Original Sin 2. With Fallen Heroes, though, it's hopping the fence into tactics games. But as producer Kieron Kelly points out, "the crossover of RPG, strategy and tactics is actually quite high". He’s talking specifically about the games that Larian's team like to play – alongside the RPGs you'd expect, he rattles off a list of tactics and strategy games: XCOM, Into the Breach, Darkest Dungeon, Heroes of Might & Magic – but it applies to the building blocks of those genres. Turn-based combat, squad selection and skill trees are common refrains, they're just turned higher or lower in the mix depending on the genre.

"A lot of Original Sin 2's combat was trying to make it as tactical as possible anyway, only in the RPG setting," Kelly says. "So all we're doing is condensing that into a more refined, tighter experience." Fallen Heroes is tightly linked to its predecessor, in a lot of ways. While over 1,000 years passed between the first and second Original Sin games, this story picks up just two years later from one of Original Sin 2's multiple endings. "This game is not Original Sin 3, it’s very much a spin-off, but it is using a canon ending of Original Sin 2 and building a story from there," says Kelly. Under said canon, the magical Source has left the world and all of the 'origins' – Original Sin 2's term for the pre-rolled characters who could either be your playable protagonist or members of your wider party – survived the events of the game.

The game casts you as the captain of the Lady Vengeance, a flying ship first glimpsed in Original Sin 2, staffed with a crew made up of those familiar faces. We get our hands on Ifan, Lohse and Fane, but all six 'origins' will be available to recruit, as well as Malady – who appeared in the last game as an NPC – and one as-yet-unnamed character.

On board the ship, you’ll have conversations with each character and make decisions that guide the flow of the story. Larian is crafting over 60 missions, but one playthrough will see less than half of those, depending on the path you choose. This is all very much the stuff of RPGs, although the structure is intended to be a lot more concentrated, offering a half-hour loop of mission and story rather than the lengthy sessions needed to advance the plot of something like Original Sin 2.

On board the ship, you’ll have conversations with each character and make decisions that guide the flow of the story. Larian is crafting over 60 missions, but one playthrough will see less than half of those, depending on the path you choose. This is all very much the stuff of RPGs, although the structure is intended to be a lot more concentrated, offering a half-hour loop of mission and story rather than the lengthy sessions needed to advance the plot of something like Original Sin 2.

Those missions themselves will be immediately recognisable to anyone who has played Larian's previous games. Characters have the same magic and physical armour protecting their health bar. Each unit has a pool of action points, which if unspent will be carried over to the next round. Levels feature various surfaces with environmental effects: fire can melt ice into water that can be electrified to shock an enemy, and so on. In truth, the version we play could almost be an Original Sin 2 mod – because that’s essentially what it is right now.

These are still early days for Fallen Heroes. Larian has been working on the game – Kelly uses the word "experimenting" – for six months, together with Logic Artists, a Danish developer best known for the historical tactics series Expeditions. It was less than two months ago that Larian played a build Logic had sent over and decided it was going to proceed with the game. That was the version before the one we're playing, and Kelly repeatedly emphasises that this is a prototype, with a lot of its assets borrowed directly from Original Sin 2 and a hacked-together UI that’s roughly halfway between that game and Expeditions: Vikings.

This only serves to highlight the aforementioned similarities in the combat system. The difference is that each mission comes with objectives that go beyond ‘win the fight, get back to the story’ – one tasks us with destroying three ballistae that are firing on the Lady Vengeance, for example. Original Sin 2's D&D-style initiative queue has also been ditched, in favour of the full-team turns that are more usual in a tactics game.

What goes up must come down

This is a small change, but one that's intended to open up the possibility space for combinations and synergies. Larian wants to push interactions between abilities and environment to the forefront even more than in Original Sin 2, Kelly tells us. Which is a good decision, because it’s in these interactions that Fallen Heroes really comes alive. The game has added a new elemental surface, the kinetic Sulfurium, and along with it a physics engine. When Sulfurium gets hit, anything on top of it will be blasted away – meaning units can be sent tumbling across the level. Combine this with characters' skills and you get brilliant moments of emergent silliness. You can walk a unit onto Sulfurium then use Nether Swap to switch places with an enemy, setting them   up for a nearby archer to loose a well-aimed arrow. A metamorph character can use their ability to grow magical horns, then bull-rush a line of units to knock them back onto the surface and trigger an explosion.

Because your squad all act simultaneously, rather than waiting for their place in the initiative queue, it should be easier to set up and execute these kinds of combos. And there's more room for on-the-fly experimentation, because you're building a tailored squad for each mission. You can control between four and six units, with one hero character plus a handful of basic units and, once you meet them in the story, named veteran troops with unique power sets.

You'll likely be forced to explore every combination, because – as the title hints – permadeath is one trope of tactics games that Larian has embraced fully. Basic units will regenerate endlessly – there's always another archer or healer – but heroes and veterans can be lost forever. "A lot of your decision-making and choices in character composition will be, 'Who do I bring on missions and why?'" says Kelly. "As you lose troops, it’s not so much that you lose power so much as options. It’s like losing a limb, rather than your heart."

Larian is keen to avoid the 'death spiral' of games like XCOM, where too many failures mean you should probably abandon a run entirely and start again. The Divinity universe does offer a solution to death, in its resurrection scrolls, but Larian is still undecided whether these will carry across to Fallen Heroes – after all, with the Source drained from the world, it makes sense that miracles would be in shorter supply.

The most likely option, Kelly says, is that the player will have just a couple of chances to resurrect one of their fallen heroes, to give as much weight to bringing someone back as to losing them. It's a very RPG solution, emphasising narrative as much as systems, and one example of how an outsider perspective can bring fresh approaches. As Fallen Heroes continues to grow away from its roots, it’s this kind of cross-pollination that should help Larian and Divinity find its own space between two well-established genres.

This feature first appeared in EDGE Magazine. For more excellent features like the one you've just read, don't forget to subscribe to the print or digital edition at MyFavouriteMagazines.