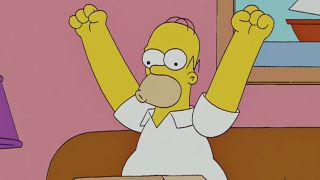 Disney Plus will introduce a 4:3 aspect ratio for ‘classic’ episodes of The Simpsons within the next few months. While Disney Plus error codes garnered much of the attention at launch, the decision to present seasons 1-19 of the animated sitcom in a 16:9 widescreen format received some significant criticism.

"We presented The Simpsons in 16:9 aspect ratio at launch in order to guarantee visual quality and consistency across all 30 seasons," Disney said in a statement (via The Verge). "Over time, Disney Plus will roll out new features and additional viewing options. As part of this, in early 2020, Disney Plus will make the first 19 seasons (and some episodes from Season 20) of The Simpsons available in their original 4:3 aspect ratio, giving subscribers a choice of how they prefer to view the popular series."

To recap, The Simpsons is currently only available on Disney Plus in a 16:9 aspect ratio, which is designed to best suit the emergence of widescreen TVs in the mid-'00s. However, The Simpsons used the square 4:3 ratio from 1989 until 2009’s season 20. The Disney Plus versions even led to some sight gags and background jokes being cut out.

While an exact timeframe hasn’t been set, it does line up with the Disney Plus UK release date of March 31. If stretched and slightly distorted Simpsons episodes were a deal-breaker for you, there’s every chance they’ll be fixed by then.