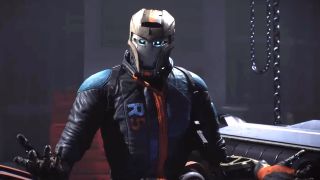 Disintegration takes an interesting approach to the first-person shooter genre by putting in charge of a small group of outlaws who you command on a Gravcycle - a kind of mechanical hoverbike - above the battlefield. Set in a near future Earth where the world is in a state of collapse, war has broken out, and a group of outlaws fight back to "reboot humanity."

With a single player campaign and multiplayer modes, the futuristic hoverbike- riding robo action comes to us from V1 Interactive, which is led by former Bungie director and original Halo creator, Marcus Lehto. This closed technical beta gives you the chance to try out two of the game's multiplayer modes.

The code are only redeemable in the EU for PS4, and the giveaway is first come first serve, so be sure to enter now if you don't want to miss out. All you have to do to snag a key is enter your email address into the widget below - you'll have to enter your address twice in order to confirm it. We don't see your address, and Godankey doesn't save it, and each email address will receive one code. The giveaway will go until there are no more keys left, so be sure to enter before they run out.

A direct link to the campaign can be found here.

So, just to remind you, the closed beta will run for two days from January 28 - January 29 and will give you the chance to choose from seven crews, command ground units, and test out two modes and maps. We'll see you on the Gravcycle.

Read our interview with Disintegration director and Halo's co-creator Marcus Lehto, who talks about the parallels between the games.