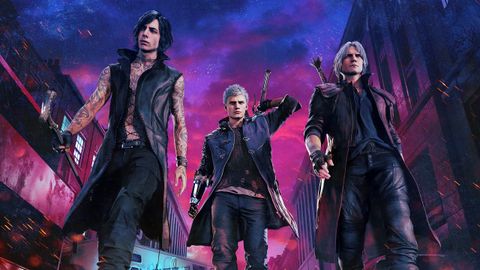 The best parts of Devil May Cry 5 aren't when I'm being most challenged, they're actually when I can cut through that challenge, when I'm in full flow pushing buttons without having to think about it, mentally flicking through a menu of outlandish moves to weave my own varied combos. Of course, make no mistake, the game has its fair share of hard-as-nails boss encounters and a bevy of increasingly hard difficulty modes that can absolutely make me crush my controller into a fine dust. But it's watching the style meter ticks up, adding extra layers to the pulse pounding soundtrack with my moves that's the major appeal. Devil May Cry 5 is an absolutely stunning return to form that builds on improvements Ninja Theory's spin-off and reimagining DmC.

But for all the bright sparks, spurts of blood, raging fires and more action hitting the screen at once - all gloriously rendered in Capcom's own Resident Evil 7 RE engine - it’s always the character you’re controlling that’s your real focus. The true genius of Devil May Cry 5 is that it's not just a great action game - it's three. You play as Dante, Nero and V, and each of these playable characters are so unique that I might as well be playing different games that share a narrative. These are no simple reskins.

As you fight your way through hordes of demons on your way to Qliphoth, the massive demon tree from Hell that's invaded Red Grave City, it's easy to see that each character is based on the same framework. Everyone has a long range attack, a close range attack, a dodge/evade, a lock on, and a couple of unique moves mapped to other buttons and so on. The rating system revolves around avoiding being hit, and making sure you're using a variation of moves, regardless of who you play as. But that's where the similarities end.

Nero's intricacies like his heavy-hitting revolver, the sword with motorbike throttle handle that you can rev mid-combo for stronger attacks, and more return. But this time, his unique arm - a literal demon arm - has been stolen for plot reasons, meaning he's got a slot for an interchangeable robot arm. These, known as Devil Breakers, are littered around the levels to pick up or available to buy from the customisation shop. From abilities ranging from whips to rocket punches, they're all pretty crazy, and always come with the ability to grapple enemies from a distance, which is handy.

However, you can't switch them out on the fly, which feels a little annoying at first, though it's clear that it's meant to encourage you to mix up the powerful moves to get through them. You can break them entirely, which lets you unleash a powerful attack and switch to a new arm, but it'll just be to whatever is next in your arm magazine. Seriously. Particularly intense moments see deft use of all the arms in your magazine to run rings around your enemies. It's terrific fun, but so much so that the Devil Breakers can overshadow things like Nero's Exceed system - the robo-arms are just more well developed. It's easy to get carried away and forget to make best use of Exceed when you're distracted with the Devil Breakers, but it does end up feeling pretty satisfying when you do manage it.

Dante is the least changed from his previous appearances. He's still all about swapping between a large arsenal of guns and close-quarters weapons on the fly; as well as switching styles between Gunslinger, Trickster, Sword Master, and Royal Guard, which give you access to different moves depending on what you have active. Considering you can switch between all of these mid-combo, the options are immense. Fittingly you don't get to play as him until around the midpoint of the game, so the slightly more complex aspect of switching between all these things feels much easier by that point. New weapons offer great new twists on his gameplay, feeling right at home alongside returning and revised classics - a fitting metaphor for Devil May Cry 5 as a whole.

It's V that offers the freshest gameplay for the series, and understandably would make veterans the most hesitant. Instead of getting involved in the action himself, he summons demons to do the dirty work first before zapping in with a finishing move. You have the option to summon three demons, which are all based on enemies from the first game, but functionally they provide the same roles as the other two devil hunters’ weapons.

Griffon fires long range zaps, and the panther-like Shadow uses claws and tentacles. The main difference is you're remotely controlling them, giving you a fresh perspective on encounters as you hang back, waiting to land that final strike with your cane. Summoning the third demon, Nightmare, uses your devil trigger meter, and he'll mostly just destroy everything around him without you having to worry about it. V adds a new dimension to the series that proves Capcom can continue to innovate as well as refine what came before.

All three characters team up to take down the demon tree that's torn up this sort of “Not London”, Red Grave City. The ruined city has some interesting environments you don't get to see a lot in games, and being from the UK it was nice to see designs inspired by where I live, even if that's just things like big red public telephone boxes (which you use to call up Nico, the engineer of Nero's arm, and all-round customisation shopkeeper queen). While fun to a degree, the settings do at times lean towards the same colour palettes of browns and reds, especially as the action moves deeper into the Qliphoth tree. It would have been exciting to see the inside riff on the idea of bright, bizarre flora more than the repeated thorny vine theme, as the bright early morning colours of the previous levels felt very fresh.

That doesn't detract too much from the game's appeal as a whole though, especially as each character has unique missions, which is a big step away from the huge amount of repetition in Devil May Cry 4. At points you'll even see the others fighting their own way through sections in the distance, which is rather cleverly drawn from actual player combat data. Perhaps you'll even see me in the distance! Because each of the 20 or so missions is one character or the other, that doesn't leave you with a whole heap of missions per character, but that also means nothing really overstays its welcome. The appeal is, as always with Devil May Cry, on replaying for more stylish scores, to challenge higher difficulties, and find all the hidden orbs and secret missions.

Even on easier difficulties the game retains a reasonable amount of challenge and plenty of options to feel like you're overcoming them with stylish scores without being too unforgiving. The option for the game to give you auto-combos also helps as an entry point for new players. For a game that can have such a high skill ceiling with crazy combos, it's excellent to see genuine care taken with welcoming newcomers. The story though is mostly going to be hot nonsense for those unfamiliar with the series, as it references and pays off on a surprising amount of lore - though enough is unique to this adventure and explained to the point where it makes a certain amount of thrilling sense. It's a wild, exhilarating ride from start to finish.

Reviewed on PS4 Pro and Xbox One.