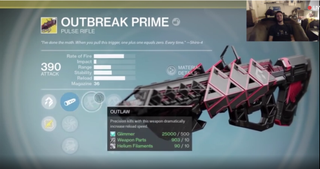 See that up there? That's Outbreak Prime. Destiny: Rise of Iron's Exotic reward for undertaking the most absurdly complex ARG puzzle known to Guardian-kind. Solved on Reddit overnight thanks to multiple threads and the map below (yes, it's a map), it was all streamed on Twitch by Datto. It all takes place in the Wrath of the Machine raid and this hasn't just been a case of getting Guardians to stand on different points at the same time, there's been maths involved in the process. Maths, I tell you.

It's insanely complex and has taken stacks of Reddit threads to solve - including /Raidsecrets  -  but this thread does a pretty good job of explaining exactly what needs done for the first part of the quest.  I say 'good job', but it includes a step called 'Tuning the Engine' in which Guardians need to enter numbers into columns and do mental arithmetic.

I expect a full video on each step to arrive from Datto imminently, but it all starts with those Monitors people have been finding in the Raid. You can find all of the Monitor locations hereand they need to be activated. Then, in true Destiny raid style, sequences need to be activated in a certain order and then Guardians need to convert numbers before stepping on and off canisters, earning a SIVA Engine and continuing a quest.

Sound insane? It is, but it definitely leads to the level 390 pulse rifle Outbreak Prime, and for most people that'll make it worth the complex quest. I can only wonder if Bungie was expecting it to be solved this quickly.