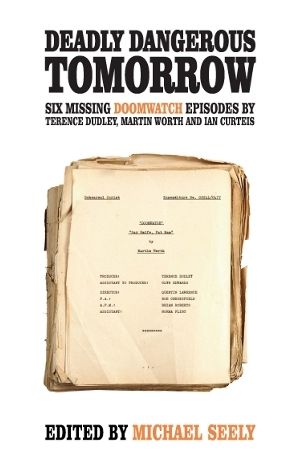 There shouldn’t be any pressing need for this book to exist. Sadly, the short-sighted attitude of the BBC to their archive back in the ‘70s means we’re glad it does. Fourteen episodes of acclaimed eco-drama Doomwatch have been wiped; this book reproduces the scripts of half a dozen of them.

Five hail from the third and final series, which revamped the show more along the lines of a political thriller, with less focus on scientific investigation. “Fire And Brimstone” and “Say Knife, Fat Man” are both race-against-time tales concerning the theft of deadly weapons – anthrax and plutonium respectively. Both read like they made for gripping television, but not much like the Doomwatch of old.

Mind you, you might conclude that’s not such a bad thing when you read the sole series one script, “Spectre At The Feast”, a feeble tale of LSD-like hallucinations caused by eating polluted lobster (now there’s an everyman problem for you…). Sadly, these include a rather racist vision of a spear-waving “negro”. The other three episodes included are “High Mountain” (where Doomwatch ’s Dr Quist is tempted with corporate funding), “Deadly Dangerous Tomorrow” (which dramatises the debate about the effect ecological policies have on the developing world, in a drearily didactic manner) and “Flood”, which sees London threatened by… well, you can probably guess.

The scripts are presented with meticulous care. Footnotes provide behind-the-scenes insights and historical context, while differences between the rehearsal script and the final camera script are flagged up in bold and italics; for “High Mountain”, where the changes were more significant, both scripts are included, in full. It’s an approach we’d love to see adopted for a Doctor Who script book sometime. How about it, BBC Books?