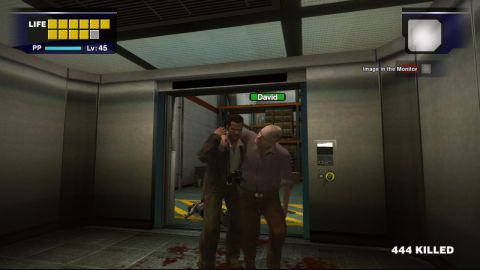 Is Dead Rising a zombie game, or a GTA-esque, sandbox-style beat ‘em up with wall-to-wall undead, or a mash up of dozens of different gameplay styles that are more than the sum of their parts? You would do the game right to call it pretty much all of the above. But one thing that Dead Rising isn't is a mere open-world zombie-killing simulator. That's apparent in its highly structured storyline which remains wonderfully true to every single serious-toned zombie flick that George Romero ever deemed fit to attach his name to: You are Frank West, a freelance photojournalist looking for the scoop to end all scoops. And boy, do you get it after being dropped in the middle of Anytown, USA - if Anytown, USA happened to be crawling with zombies. Now you've got 72 in-game hours to uncover the truth and reconvene with helicopter to get the hell outta Dodge.

Beyond the 72-hour goal, your objective is multi-fold and pretty hardcore. You can casually just wade into the undead-filled mall for some kicks and simply whale away with whatever weapons you can find. There are hundreds, from traditional mayhem-makers like chainsaws and pistols to less conventional weaponry like plasma TVs with stabby corners, hedge clippers that chop zeds in two at the torso, and pointy electric guitars that deliver slabs of head-busting heavy metal. When you're ready to track down the disease instead of harassing the symptoms, you can follow what the game calls "Case Files," a string of time-constrained events that you must meet in order to "solve" the mystery of the zombie outbreak within the 72 hours.