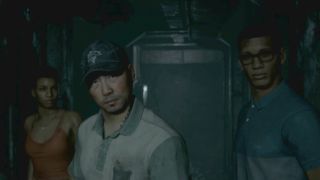 Dark Pictures comes from the minds behind Until Dawn, so I really shouldn’t be surprised that my time with it kicks off with an eerie narrator with a thoroughly proper accent explaining how he sincerely hopes the outcome of all this is what I want. Needless to say, I don’t trust him one bit. There’s also no chance that I believe this will end well. As Dark Pictures is an anthology series, the tale I’m about to embark on - Man of Medan - is just one of the narratives available. Each one is a spin on an urban legend, with an emphasis on choice and atmosphere, and the same branching decision system from Until Dawn where your actions determine who lives and who dies. Man of Medan is centred around a mysterious shipwreck that some intrepid (and doomed) youths have decided to explore.

I’m curious how my choices actually affect the events of Man of Medan. So right at the beginning when this definitely-untrustworthy narrator asks me if I’m rational or emotional when it comes to decision-making, I decide to try both on for size. First I take the rational approach. No sooner have I selected the ‘rational’ option, the narrator tries to convince me that even though I’ll try to do what’s “right”, there is no right or wrong in Dark Pictures. It’s as if he’s already trying to make me doubt myself, planting that seed of doubt in my mind when it comes to figuring out which decision is the correct one. It’s… unnerving.

Let’s be rational about this

I begin on my own as Fliss, the skipper of the boat that has brought the young explorers to the edge of the shipwreck. Somehow I’ve got into a situation where I’m at gunpoint being ushered through the ruined ship by a very nervy individual who’s convinced that there’s something out to get us. Walking through the rusted corridors and watery floors is a cinematic masterpiece, so much so that for a moment I don’t realise I can move as I assume I’m still in a cutscene. Every now and again I see something flash in the distance, and can choose to go up to it and inspect it. On one occasion it’s a hat with ‘MEDAN’ embroidered onto it, and another it’s a spent bullet next to a very dusty corpse. After each discovery I’m alerted that I’ve uncovered a “secret”, but nothing of noticeable consequence occurs. It’s a shame, really, as a hint about what exactly went on in this rusted ship would have pushed the eeriness to the very edge and given me just a glimpse of how it got into this decrepit state.

Alone, there’s not much for me to do with these objects besides mutter to myself about what they could be. Fliss isn’t much of a talker though, so she doesn’t go into a lot of detail. Me and my jumpy associate wander around the ship, before he becomes convinced that something is around the corner. Psyching himself up and getting out his gun, he leaves me behind and disappears down a corridor. As you’ve probably guessed, it doesn’t end well. The sound of gunfire reverberates around the metal ship, but when I go after him he’s nowhere to be seen. A smashed torch is all that’s left.

I nearly jump out of my skin when Brad, the socially-shy member of the group, appears out of nowhere. Faced with the choice to act suspicious or surprised, I go for suspicion. How the hell did he manage to sneak up on me? His explanation isn’t particularly convincing, and he only gets weirder. When we make our way down past some more dessicated corpses he says something that freaks Friss the hell out, and I can either reassure him or tell him to (bluntly) stop acting so damn weird.

Rationally, I’m now super suspicious about Brad. He just turned up out of nowhere, then acted really strange. So when the opportunity comes to save him from a gaggle of reanimated corpses I… try to pull him to safety. Yeah, it doesn’t make sense to me either, but it was my one irrational moment in this playthrough. And I paid the price. Brad lurches forward, and I’m ready to accept his thanks - but instead dead, lifeless eyes stare out from his skull as he reaches out towards me and the screen fades to black.

Second time around, I tell the creepy narrator that I tend to be more emotional when it comes to creepy ships and the ever-present threat of death. His response is different this time: “I do hope the outcome is what you want” he purrs. Great. That sounds promising. When I begin, I’m now accompanied by Brad right from the very beginning. Upon examining the same items as before - a hat, a bullet, etc - we have a little chat about what it could be and I feel less alone. I even begin to like Brad, in his own shy, socially awkward kind of way.

I’m unsure why Brad was now alongside me every step of the way. Perhaps it’s because the ‘emotional’ option I picked assumed that I’d find it harder to make decisions if I knew someone I cared about was in danger. Quite possibly the game wants to take advantage of my emotional decision making and endear Brad towards me, making me even more conflicted when the time comes to either rescue Brad or save my own skin.

Either way, each playthrough pushes me towards the Brad vs zombies conflict, no matter if I treat him suspiciously or try to ease his jittery fears. Both sessions have me face off against a decomposed face that emerges from a pool of water, trying to strangle me with disembodied hands. I succumb to its grisly embrace in my emotional playthrough, but I have no idea how - or if - it affects Brad as the screen fades to black and I’m back at the menu screen again. Dark Pictures has reeled me in with an intriguing mystery in its first episode, but something tells me the consequences to my actions are going to need more time to become apparent than a 10 minute demo offers. Half of me wants to obliterate the memory of Brad’s withered face from my mind… while the other wants to see if we could save him. Dark Pictures is already working its dark, malevolent magic...