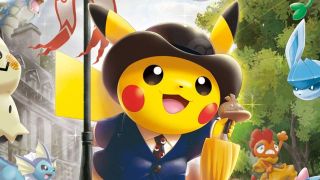 The absolute cutest Pokemon is always going to be up for debate since there are now almost 900 unique pocket monsters, but I've set out to answer that question. From classic cuties like Pikachu and Togepi to recently released Pokemon such as Chewtle and Yamper, this is the ultimate list of the top 20 cutest Pokemon. Please don't be mad if your favourite didn't get in; it's surprisingly hard to whittle down a list  from 895 Pokemon (and counting) to just 20.

At the top of the list is Zorua, the foxy Dark-type Pokemon from Gen 5. Just look at that red tuft of hair and bluey-green eyes. Zorua is the type of companion Pokemon you could trust to fend off the worst of attackers, yet still cuddle up to by the fireplace on a winter evening.

Have you ever seen a Pokemon as jovial as Pachirisu? With its bright yellow cheeks and enormous fluffy tail, this Gen 4 Electric-type Pokemon can pack a punch in battle but won't shock you... unless you try to take its food, which it stores inside fur balls it regularly sheds. It needs something to work that singular tooth on after all.

Across the eight generations, there have been a number of "Pikachu clones" that try to emulate the lovable, familiar nature of Ash's first best friend. Dedenne is the Gen 6 iteration and while it is undoubtedly cute with its chunky belly and impressively long tail, its whiskers look like they could be somewhat spiky. That said, when there's a bunch of Dedenne together, it is truly adorable.

Most dinosaurs can rarely be described as cute, but just look at Amaura. Who knew something so delightful could be resurrected from a fossil, of all things? It has two yellow-pink sails on the inside of either eye that protrude out of the top of its head, and at just over four feet tall, it can walk alongside you and be your best friend. Be right back, off to resurrect as many fossils as possible.

This may be controversial since Pikachu is basically Pokemon's mascot, but there's no denying that the face of Pokemon is a cute lil' bugger. It's also incredibly feisty and as proven by Ash's journey in the anime, will become your best friend and sidekick over time. Plus it looks simply dapper in a hat, as every Pokemon Go player knows too well!

An unconventional entry as Gible isn't cute in the traditional sense, especially since it can be incredibly vicious when it wants to be, but just look at it! Gible has two horns that look like jet engines, a bright red underbelly, and since it doesn't have a neck, it's essentially a ball with some extra bits stuck on. It also loves play fighting with other Gible and tends to accidentally bite itself because of clumsiness, so Gible is essentially a small, over-excited child.

Birds don't tend to be cute but Ducklett is definitely the exception. This light blue duck just looks so soft and friendly, especially with its endearing look and dark blue underbelly. Since it's so damn cute, it's ironic that Ducklett is rumoured to be inspired by The Ugly Duckling.

Shuckle is essentially a dinosaur-turtle hybrid, with a long neck and red shell. The shell isn't just for protection though; it collects berries and stores them inside before using digestive juices to ferment them. Tasty! So just make sure you don't stick your fingers inside Shuckle's holes when it's hiding and you'll be alright. Plus, it can also completely destroy rocks with those digestive juices, so what's not to love?!

The first (but certainly not the last) entry from Pokemon Sword and Shield, Chewtle is just a little fighter who can take on the world. Chewtle is the sort of Pokemon that will get annoyed when you call it cute, but let's face it; Chewtle is bloody adorable. Just like Pachirisu, it has just one single tooth, big orange cheeks, and it walks like you'd expect a turtle Pokemon to; slowly but with immense purpose.

Stufful is one of the rare occasions when its evolution is almost equally as cute, because while Bewear looks like it could crush you, it would also give the warmest hugs. Stufful however just about edges it, with small pink paw prints on the bottom of its stumpy brown legs, and a white headband to accentuate the pink. The only downside is that Stufful doesn't like being embraced and will flail wildly if you try... so just keep your distance!

While actual baby Pokemon exist in the Pokemon universe, Toxel feels like the closest one to a human baby. It sits firmly on its bottom with a grumpy look on its face and thanks to the patterns on its body, it looks like it's wearing both a white apron and nappy simultaneously. Just don't cuddle Toxel too tightly, because it can cause a paralysing sensation.

Ah, Togepi... the Pokemon the anime tried to force in as a second mascot by making it Misty's companion throughout, but instead people still preferred Pikachu. That said, Togepi is definitely cuter; it's a baby Pokemon inside a multicoloured egg shell for goodness sake! Not to mention Togepi's ability to siphon positive energy from people and release it to those in need so everybody can be happy.

While Snorlax is soft and squishy, it looks slightly too grumpy to be considered cute. Munchlax on the other hand is a jolly thing that will only evolve when it has high enough friendship. It constantly has a smile on its face and is essentially the polar opposite to Snorlax, as Munchlax is described as a "very hyperactive Pokemon", despite moving very slowly. Those enormous eyes and pointy ears are glorious.

Look at Axew. Just look! It has a necktie! And adorable tusks! It even walks on two legs! Okay, that's enough exclamation marks but seriously, Axew is the cutest Dragon-type Pokemon yet. It can also climb walls with incredible skill given it has very short limbs. Plus it evolves into Haxorus which is one of the most badass Pokemon going.

Another Pikachu-inspired Pokemon, Togedemaru is the definition of thicc. It is quite literally a sphere with a tail, feet, and facial features. When it's happy, Togedemaru will curl up into a ball and roll around uncontrollably. How cute is that?! It also has a much wider range of facial expressions and it arguably looks even cuter when it's in a grump.

There's no denying it; Yamper is the epitome of a good boi (or girl). This Electric-type Corgi constantly has the zoomies as it chases after anything moving fast, whether it be people, cars, or other Pokemon. It can herd Wooloo like a sheepdog, it almost always hangs its tongue out, and it has an enormous fluffy yellow ruff around its neck. I would die for Yamper.

Everyone knows hedgehogs are too pure for this world, right? Well, check out Shaymin (Land Forme). This Grass-type is the only legendary or mythical Pokemon in the list and it features leaves on the top where spikes would usually be if it were, you know, an actual hedgehog. If I had a Shaymin in real life, it would never leave my side and since it's only 0'08", it could sit on my shoulder and whenever it gets comfortable, it grows flowers on its back. It gets attracted to areas with lots of gratitude too, making Shaymin one of the most wholesome Pokemon there is.

While Donphan may be a ferocious, hard-plated beast, Phanpy is a baby elephant that is just the cutest elephant you'll ever see. Much like Dumbo, it can use its enormous ears to cool itself down, while it can send people flying when it playfully bumps them with its snout. Despite being just over 1'00" tall, it can carry an adult human on its back. Imagine having your own Phanpy and going for rides! Unlike real elephants, it won't grow to be too big either, just make sure you don't evolve it.

Electric-type Pokemon have been a common occurrence in this list, and there's one more; Shinx! Shinx is an utterly adorable feline Pokemon that seems to be inspired by a lion cub, and has just the most dapper tuft of hair sticking out of the top. It's even wearing a bow tie! It has huge, yellow eyes and half-blue half-black fur to make Shinx as cute as anything.

That's right; this Fire-type Pokemon is objectively the cutest Pokemon in the world. Okay, no doubt plenty of people will disagree, but seriously; Litleo is like a dog-bear hybrid with a red mohawk. A red mohawk! It has enormous, gorgeous eyes, the cutest tongue, and soft paws that couldn't hurt a fly. It's also based off a lion cub, much like Shinx... Game Freak, more lion cub-esque Pokemon in future please!

If these aren't cute enough for you, why not check out the best Pokemon in Sword and Shield?