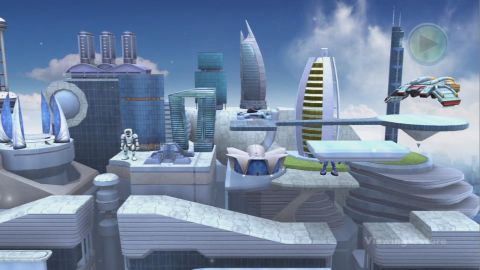 With a debut trailer surfacing in early August of this year, EA’s Bright Light Studios showed off a goofy-looking family game that over-ecstatically invited you to “use your imagination to create a scene your way.” So now that the game is out, how does one really describe the Create experience? Imagine a game like LittleBigPlanet, suck out all of the appeal and charisma until you’re left with a dry withered husk of a creature, then stomp on it repeatedly.

Above: Don’t let the bright colors deceive you – she’s dead inside

The game provides the player with 14 worlds of various themes (suburbia, outer space, Halloween, etc.) that supply 10 different Create Challenges to solve along with 5 Create Chains to pull off all introduced by silent blocks of text. Basically, there’s definitely no shortage of stuff to do, but the presentation of it all is pretty lifeless. Completing the challenges and chains awards Sparks, which unlock new worlds and game objects to tinker around with.

While there is some small satisfaction to be had seeing the objects you set up in a challenge react to each other like a stack of meticulously aligned dominos, the majority of challenges consist of getting some random object from point a to point b. This gets really old really fast. Likewise, the chains aren’t all that interesting, either, unless you possess an overly enthusiastic flair for painting simulators. Each new world is presented without any set colors or object layouts, so the chains task you with applying textures to the landscape, setting up objects, and throwing on stickers like some deranged landscaping interior decorator.

Aside from trudging through the various worlds and unlocking stuff, players can create custom puzzles and share them online; however, it’s a little hard to imagine the type of person who would enjoy doing this sort of thing. Also, saying that you actually get to create the scene is stretching it a bit. In actuality, you’re provided with a few different terrains that can’t be physically altered in any way. Create is almost suffocating in how limiting it actually is.

Above: “When does LBP2 come out again?”

The largest issue that really brings this party crashing down is that the game has no soul to it. New worlds, challenges and tutorials are presented with all the intrigue and personality of a Power Point presentation and the score for each stage sounds like elevator music. This is a cold, dead world with absolutely nothing that’s humanly relatable. This begs the question: why would gamers (family-oriented or otherwise) want to dish out money on such a run-of-the-mill game editor like this when it is absolutely eclipsed by better games like LittleBigPlanet or Spore? This game’s title is a massive misnomer. You don’t “create” anything – you mess around with preset environments and then slap stickers all over it. You want to get the Create experience and save a few bucks? Buy a coloring book.