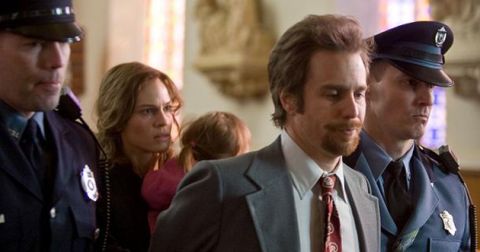 When is a true story too good to be true?

Probably when it involves a woman who spends years putting herself through high school, college and law school just so she can fight for the release of her incarcerated brother.

The woman in question was Betty Anne Waters, a single mother whose remarkable 18-year quest has now been brought to the screen by director tony Goldwyn. In doing so, though, he’s left out a significant nugget of information that would have put quite a different complexion on this heartfelt tale of determination and devotion.

To say more would violate our no-spoiler rule. Suffice to say there’s something more than a touch disingenuous about a fact-based yarn that revolves around a man convicted of murder on unreliable evidence.

It’s not enough to spoil your enjoyment of a polished legal melodrama that elicits a typically forthright turn from Hilary Swank as Betty Anne and an intriguingly mercurial one from Sam Rockwell as her far from angelic sibling.

Yet it does make you wonder how many other details were omitted in order to facilitate the desired emotional uplift.

It would be easy to dismiss Goldwyn’s pic as a TV movie of the week with ideas above its station. But that would downplay the contributions of Minnie Driver, on top form as swank’s loyal compadre, and Juliette Lewis, making the most of her two scenes as the woman whose testimony sent Rockwell down.

OK, so Melissa Leo is a tad two-dimensional as the vindictive officer certain of his guilt. But Peter Gallagher levels the scales as the DNA pioneer to whom swank turns, not least by bringing a sprinkling of testosterone to a film that hardly wants for oestrogen.