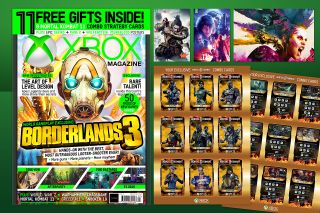 It’s been 10 years since Borderlands first exploded onto our Xboxes, and now with the latest instalment Gearbox are promising more, bigger and better – including way, way more guns. The number of procedurally generated weapon combo possibilities in Borderlands 3 is an eye-watering one billion guns. The action this time moves from Pandora out into the wider galaxy, with different planets to visit via a spaceship ‘hub’, while the series’ trademark humour and bright visual style is very much still in evidence. Read our in-depth hands-on gameplay preview, along with insights from Gearbox’s development team, in the latest OXM.

In homage to Borderlands, we have a frankly extravagant 11 awesome free gifts for everyone who buys the magazine, including posters and Mortal Kombat 11 tips cards. Here's a breakdown of what else we've got in the new issue of OXM, including the one-year birthday of Sea of Thieves - where we talk to Rare Studios boss Craig Duncan about the state of the game, the next year of great content and more.

The Art of Level Design

We talk to the talented level designers behind some of our favourite stages in games like Shadow Of The Tomb Raider, Apex Legends and more! What does it take to be a level designer? What goes into creating some of the finest game stages in the world’s biggest games? We have the answers.

Panzer Dragoon Orta on the original Xbox was a dragon-flying classic from arcade giants SEGA - find out the story behind it in this month's OXM!

Get Good at Fighting Games

We show you how to become a combo king and beat all comers in games like Mortal Kombat 11.

Find out what's going on in the world of Xbox, and see all the games worth playing and all the TV worth streaming through your Xbox with our comprehensive best Xbox games Directory.

And if you're a subscriber, you'll have already had the mag delivered direct to your door with this exclusive subscriber-only cover. How cool is that?