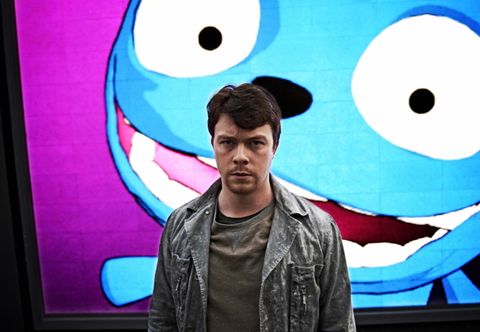 THE ONE WHERE Comedian Jamie Salter has a successful gig as the voice of Waldo, a potty-mouthed computer-generated blue bear with a penchant for embarrassing figures in the public eye. When his employers decide they want to push the character into a new arena, Salter reluctantly agrees to take Waldo to a hotly contested by-election – and ends up playing a much bigger part in proceedings than he expected.

VERDICT The third instalment of Black Mirror 2.0 is the least sci-fi of the lot. It's also the weakest of the series, a disappointing attempt at political satire that's neither funny nor perceptive enough to stick in the memory. The Thick Of It this ain't.

Indeed, as four-letter-word-spouting iconoclasts go, Waldo isn't going to be giving Malcolm Tucker any sleepless nights. He's a fantastic premise and brilliantly executed (he really does feel like a fully interactive character), but he's way too two-dimensional (pun intended) to convince as a zeitgeist-creating TV star. So where he should be skewering politicians with some clever, Ali G-style faux-ignorance, his conversation is instead based around the sort of unintelligent trash talk you'd expect to see on Jerry Springer. He's the animated equivalent of a "your mum" joke, and it quickly becomes tedious. In fact, the charmless Waldo's got so little going for him that you almost start to sympathise with slimy Tory candidate Liam Monroe. (Almost, but not quite.)

Even if you're prepared to accept that Waldo's crude nature is essentially the character's function in the story, everything else is utterly predictable. There isn't a storytelling trope here we haven't seen before, whether it's the unwitting bystander thrust into the forefront of political life (isn't that Being There ?), or a moral vacuum at the heart of big business.

It all leaves you wondering what Charlie Brooker is actually trying to say. That idiotic things are sometimes unfathomably popular? That the general populace has become disenchanted with politics? That the major political parties are all as bad as each other? That market forces sometimes bulldozer common sense? Hardly original targets, so – in the absence of many decent gags – what's the point in telling the story?

In the moments Brooker does do something unexpected it's totally unconvincing. The CIA taking an interest in Waldo as a potential catalyst for political change around the world is as ridiculous as appointing Edd the Duck as UK ambassador to the United Nations. And that end credits sequence where Waldo has taken over the world's media? It rings even less true than the replica boyfriend in "Be Right Back" . (Surely there'd be enough sane people left to pull the plug on Waldo long before anything like that came to pass. If not, this is possibly the most dystopian vision of the future ever committed to the screen.)

I could read Brooker's newspaper columns all day – he's one of my favourite writers, possessing a venom and wit that few others can match. Alas, when after being filtered through Waldo and company, that edge has been somewhat blunted. A big disappointment.

IT'S WOTSISNAMES The episode's leading man Daniel Rigby won a Bafta for his portrayal of Eric Morecambe in ace BBC drama Eric & Ernie , but you probably recognise him as one of the annoyingly smug students in those BT ads. Prospective Tory MP Liam Monroe, meanwhile, is played by Tobias Menzies, fallen angel Richard Pembroke in Eternal Law and Edmure Tully in the upcoming third season of Game Of Thrones .

TRIVIA 2 The episode is based on an idea Brooker and Chris Morris had when they worked on Nathan Barley .

BEST LINE
Waldo [to Liam Monroe]: "You're a joke. You look less human than I do and I'm a made up bear with a turquoise cock."

Read our Charlie Brooker interview about Black Mirror. There's more about the show in the current issue of SFX , on sale now.