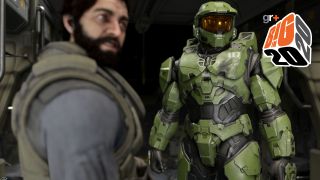 Microsoft opened its Xbox E3 2018 Briefing with a tech demo for its new Slipstream Engine. The video footage showed off a mountainous nighttime landscape, a family of deer drinking from a stream in the woods, ancient glyphs on the walls of a cave, some marines camped out among stone ruins. And then there it was: the golden, mirrored visor of an iconic helmet. Anyone who owned an Xbox console 10 or 15 years ago would recognize it instantly as the face of the Master Chief, armored spacefaring protagonist of the Halo series. He's a man of few words, but he's fiercely loyal, and – with the right set of tools – he'll save the galaxy as many times as it takes.

Halo Infinite is coming this holiday season, and it's developer 343 Industries' first mainline release in five years. "It is Halo 6," franchise writer Jeff Easterling said during an August 2018 broadcast on Mixer. "It's the next story."

Return of the Chief

Xbox's flagship brand could really use a big win on that front. The last major 343 Industries release (in collaboration with Creative Assembly) was 2017's Halo Wars 2, a fantastic real-time strategy game that, while vital from a lore standpoint, had nothing to do with the Master Chief or his AI counterpart, Cortana. Halo 5: Guardians, launched in October of 2015, was the last time we caught up with those two – in easily the most divisive, and arguably the least accessible, Halo blockbuster to date. That game, despite boasting some of the best multiplayer action in console-FPS history, simply didn't resonate with fans like Bungie's Halo: Reach and 343i's Halo 4 campaigns had just a few years earlier.

"I'm really proud of the gameplay that the team put together, but I think we learned a lot – and hopefully you saw that in last year's E3 trailer – on making sure that we really understand and value what Halo is. And I think we branched out," studio head Bonnie Ross told IGN last year. "I think there's always room to tell other stories; I just don't think that that probably should've been a Halo 5, numbered story."

Ross said she's proud of both Halo 4's strong story mode and Halo 5's exceptional multiplayer, but acknowledges the two titles' respective weaknesses. "So I look at Infinite as: we're gonna put the whole thing together."

So what sort of game might Halo Infinite be? What could possibly win back the fans disappointed by Halo 5, make the property culturally relevant again, and bring in young series newcomers? Xbox head Phil Spencer's gaming habits hint at one likely answer. According to his public Xbox Live profile, Spencer has spent 195 hours playing Halo 5 and 74 hours with The Master Chief Collection. Compare that to the 524 hours he logged in Bungie's original Destiny and the 567 hours he's put into Destiny 2, and I can't help but think that the Slipstream Engine – "the platform for the future of Halo," as Ross calls it – was developed with an evolving, Destiny-style sandbox in mind. Read into that speculation what you will, because it really could go either way.

Ross told IGN last year that there was, at one point, talk of doing a quick, "truncated" Halo 5 sequel for the release window that was eventually given to Halo Wars 2. Instead, she and Spencer chose to "innovate," hoping to build something could sustain the sci-fi IP for another decade or two of storytelling. (Halo 4 and Halo 5 were essentially built using heavily modified versions of the same technology Bungie used to make 2001's Halo: Combat Evolved.) The concern, Ross admitted, was that a lackluster sequel to the already-divisive Halo 5 might spell certain doom for Halo and the studio she'd co-founded to safeguard its beloved universe.

Microsoft has been coy about story specifics, but despite serving as a "spiritual reboot" for the series, its plot will reportedly pick up essential threads from Halo 5's ending and, probably to a lesser extent, Halo Wars 2. When we last heard from the UNSC AI Cortana, she'd been overcome with power, using the ancient Forerunners' digital afterworld, the Domain, to awaken winged war machines called Guardians – not to mention that troublesome Halo Array once referred to as "the gun pointed at the head of the universe."

In a brief interview about Infinite's E3 2019 story trailer, 343i's Chris Lee offered a cryptic tidbit: "Master Chief is going into a very Forerunner environment to kind of reconnect."

Beyond the story and the Destiny-fication of the games industry in recent years, there are some things we know about Infinite for certain. Lee wrote in a September 2018 tweet that the game "will not include real-money loot boxes," which suggests that it will likely feature microtransactions of some sort, but that they won't be randomized. Confirmed features include split-screen play, LAN support, black Spartan "undersuits," Reach-inspired armor customization, and a new Forge map editor. We know, too, that the music's being composed by Curtis Schweitzer (Ashes of Mankind, Starbound), and that the legendary Steve Downes is reprising his singular role as the voice of the Master Chief.

Halo Infinite will launch alongside the new Xbox Series X console in the holiday 2020 release window; it'll also run on Xbox One and Windows PCs. Various beta tests, through the Halo Insider program, will let players try the game out ahead of release.

Ross has said that the vision for Halo Infinite was driven by a key question: "What does Halo mean to all of us?" Players of different ages, and differing play styles, might give any number of answers. But in a matter of months, we'll find out what Halo means to 343 Industries. Here's to the next exciting era of Halo, whatever it might look like.