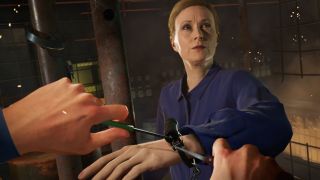 The best PSVR games will make you very glad you got that new headset over the holidays, no matter what kind of virtual reality experience you're into. The best part of the whole thing is that you're already so close - all you need to play is a PS4 and the headset (consult our guide to PSVR deals if you want to snag one on the cheap). Put those together with some picks from our list of the best PSVR games, and you'll have hours of VR joy ahead of you. Whatever you do pick up, you can rest easy knowing that you'll be able to keep right on playing when PS5 comes around, as Sony's said all PSVR games and the headset itself will work on the new system.

We've run down all the best PSVR games out there to present you with a definitive list of 10 titles that are all worth popping into your PS4 and plopping onto your noggin right now. This list highlights games that are exclusively playable in VR, as well as games that support standard-screen modes, as long as they offer some significant VR experiences. We've also included info on which controllers you'll need to play each game, so you'll know whether to bring your DualShock, Move, or Aim controller along for the ride.

If you've played Superhot, you probably already have a good idea of how it would work in VR. If you haven't, this is the perfect place to start. Superhot plays more like a puzzle game than a frantic shooter because time stands (almost) still, except when you move. This gives you plenty of time to figure out how the heck you'll survive a room full of glowing red goons unloading rifles and shotguns on you. Usually the answer involves a good deal of Matrix-style bullet dodging, throwing bottles, and snatching guns out of the hands of fallen opponents. Whatever solution you come up with, you will definitely feel like Neo.

Resident Evil 7 was one of the first big-budget games to make a dedicated VR mode a priority, and it remains one of the most gripping experiences you can have with a PSVR headset strapped to your face. There are some sacrifices from the standard version, of course - the visuals aren't quite as crisp, and some parts of the game (like cinematics) are clearly meant to be experienced on a two-dimensional display. But the raw horror of feeling like you, not a video game protagonist but you, are exploring this horrible place and encountering these awful creatures is worth the tradeoff.

Falcon Age is a game about fighting oppression with your wits, your tools, and your cute bird friend. It's also a game about collecting hats and toys because you love your bird friend with all your heart and want to see what they look like as a little cowboy. The game is playable both in and out of VR, but for the best experience you'll keep your headset firmly planted and your Move controllers ready. You spend your time in Falcon Age traveling from your home village to various sites that have been occupied by robot colonizers. Your falcon can distract enemies, allowing you to follow up with a finishing blow from your own minimal kit of weaponry. Then on the way back you can have your bird buddy retrieve distant goodies so you can cook it stat-improving treats. You know what, forget the first two things I said at the start of this paragraph - it really is all about that bird.

Trover Saves the Universe is a game about saving the universe. Yep, just saving the ol' universe - you in your floating alien chair and your friend Trover runnin' around, killing bad guys with his laser sword and jamming Power Babies into his eye sockets. This weird world is the creation of Squanch Games, the same studio that brought you the nihilistic improv splendor of Accounting Plus (and whose co-founder, Justin Roiland, also co-created Rick & Morty). Despite telling a slightly more focused story than its predecessor, Trover is no less eager to embark on extended asides and a never-ending rollercoaster of gross-out gags and slow-burn, cerebral hilarity. You can play Trover Saves the Universe on a standard screen if you prefer, but you'll feel like much more of a team if you pop on a headset and join Trover in his weird little world.

Ok, for starters, the hero of Moss is a brave, tiny mouse and she is adorable. You control her with the DualShock 4 controller like you would any other action game, but you are several feet up and away as this creepy/cool Miyazaki-inspired forest spirit thing. The physical object that is your controller becomes an in-game tool to manipulate parts of the environment as you clear the path for your little mouse pal. Lots of games star animals, but the sense of scale Moss gives you as you peer around and lean into the scene makes it feel like you really are watching a particularly clever mouse scamper across the forest floor.

There's no better online multiplayer shooter on PlayStation VR than Firewall Zero Hour. Actually, there's no better online multiplayer game on PlayStation VR, period. Think of it like Rainbow Six Siege with less wall-exploding and way more feeling like you're actually there. Military buffs will squeal with tactical delight as they sight down their authentic-looking firearms with a PSVR Aim Controller while more casual players can do just fine with a good old DualShock 4. Either way, you'll get to enjoy tense, tactical matches that encourages communication and teamplay.

If you're looking to convince a shooter fan that PlayStation VR is worthy of their attention, put Blood & Truth on their head ASAP. Especially if they like Guy Ritchie movies. It's essentially the London Heist demo from PlayStation VR Worlds built out into an entire game of its own, and it's packed with satisfying shootouts. You'll be bodily pulled into the action as you pop in and out of cover, taking potshots at enemies with the Move controllers and slapping virtual mags from your chest to your gun to reload. Blood & Truth moves fast, but it also wisely breaks up all the gunfights with an occasional lock picking, tunnel climbing, or even drone piloting segment. You can play it all with a DualShock controller if you prefer, but it won't have quite the same immersive effect.

Describing Tetris Effect feels painfully reductive: you play a standard game of Tetris in the foreground while a bunch of strange stuff happens around the board (and you) . It's basically a playable music visualizer. Like I said, it doesn't sound like much, but it feels fantastic to play in VR. All the space whales and freaky fire monks and pounding music are enhanced by the fact that you're too busy stacking blocks to pay attention to them: they light up your peripheral vision and respond to big line clears, promoting both focus and a sense of place. Tetris Effect is fully playable outside of VR, and you may want to try it that way if you're going for an endurance run, but there's nothing like submerging yourself in its strangely beautiful worlds.

What if, instead of a floating robot that shot pain rays, Luke Skywalker trained with a bunch of Tron polygons to the sound of throbbing EDM? That's pretty much Beat Saber. Your left hand controls a red saber and your right hand a blue one, and you must artfully swipe them through an advancing line of cubes. The beat of the song dictates when cubes of each color appear and also which direction you have to cut them. Keeping all that in mind while your arms instinctively swing about drops you into a deep focus state, not to mention promoting some pretty good cardio.

Astro Bot Rescue Mission isn't just one of the best PSVR games, it was one of the best games of 2018 overall. As a platformer, Astro Bot is most directly comparable to Super Mario 3D World: a series of courses give you room to explore for secrets while guiding you down one set direction toward the finish line. But then your PSVR headset puts you and your controller inside the world. You'll crane your head around as you look for hidden bot buddies to rescue, and you'll instinctively position your controller to send out ziplines or shoot shurikens to clear a path ahead. It all works together joyously and perfectly and will leave you humming that cave theme for weeks. Connor Sheridan

Not after the best PlayStation VR games? How about one of these instead: