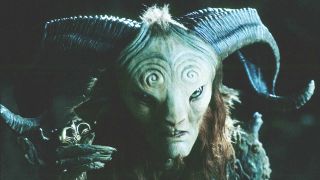 Sometimes you just want to escape reality. You want to leave work, school, and the mundane madness behind, and wrap yourself up in a blanket of rich fantasy. Films have been servicing this need for decades, bringing bizarre, and charming ‘other worlds’ to our screens. And sure, you could read a good fantasy book, but that takes ages. And you're busy. So, we've rounded up the 25 best fantasy films of all time, and tethered them together with magic rope (or 'a feature', as it's known in this realm). Why not lose yourself in one of these amazing movies?

Fire up this sword-and-sorcery epic and you're immediately greeted by a soundtrack choice that will make your very soul cringe. Push past that and you're thrown into a medieval world that's home to a well-crafted fantasy.

There's plenty to love here in Richard Donner's first post-Goonies movie. It offers up some awe-inspiring adventure that stands apart from other '80s fantasy flicks - its characters don't really know that their world contains magic. We soon find that out, following Matthew Broderick's young thief fresh out of prison. Almost immediately he's caught up with Rutger Hauer's Captain and Michelle Pfeiffer's Lady and their, ahem, unique relationship. From Broderick's accomplished comedy timing to the thrilling swordplay, it's worth checking out.

Who knew Disney could be so irreverent? Taking their big box of fantasy cliches and giving them a good shake, the Mouse House writes both a love letter to its past triumphs and gives itself a dressing down.

The result? A sprightly fantasy with a never-better Amy Adams as Giselle, a Princess cast out of her kingdom by Susan Sarandon's evil queen. Banished to the mystical and strange land known as New York City, she's left to figure out how to find her happy-ever-after in the real world. It heralded a new age for Disney in the fairytale stakes.

One of Robin Williams' finest family outings has him go caveman as Alan Parrish, a man who's been trapped in the confines of a magical board game for 26 years. It's only when Kirsten Dunst and her brother Bradley Piece discover the dusty game while exploring an abandoned mansion that they unleash Parrish. Kind of. The brilliant twist here is that if they want to truly free Parrish, they've got to play the game. And this isn't as simple as putting all the hotels on the dark blue properties in Monopoly.

All manner of variously scaly, fanged creatures want to make a meal out of the two kids - kinda like Jurassic Park but way more fantastical. This is a dizzyingly creative and a rollicking good adventure yarn.

To crush your enemies, see them driven before you, and to hear the lamentation of their women. Alright, it's not exactly Shakespeare. But who's fussed about intellect when you've got a greased-up Arnie charging across a fantasy land all in the name of revenge!

John Milius' movie adaptation is THE swords ‘n’ sorcery film of the '80s. It's ultimately more about admiring Schwarzenegger's impressive chest measurements than it is pondering the movements of the universe. That's all part of its brilliance. It's the best type of schlock that's inspired by the stories by Robert E. Howard to bring a new type of hero to audiences, a beyond-jacked warrior who stops at nothing to do what is right. That sometimes includes eating live birds.

Though it thieves shamelessly from the works of JRR Tolkien and producer-writer George Lucas' original Star Wars trilogy, Willow's so rambunctious it's impossible not to love it. The story is a tried-and-tested favorite: an evil witch versus the good, kind-hearted everyman. In this case that's Warwick Davis' farmer Willow Ulfgood, who takes in a baby found floating down the river.

While Willow's the heart of the piece, much of the film's entertaining gumption comes courtesy of Val Kilmer's grotty-toothed Madmartigan. He's an anti-hero who's as badass as he is bumbling. And the perfect contrast to Jean Marsh as the truly terrifying Queen Bavmorda (who you might recognise as the truly terrifying Princess Mombi in Return to Oz).