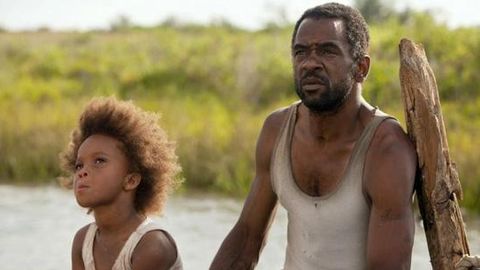 It must have been one hell of a pitch. An allegorical fable about climate change devastating a dirt-poor Louisiana bayou? Narrated by a six-year-old philosopher whose drunken daddy Wink loves home-made hooch as much as he loves her?

You’d empty a room of movie executives faster than Wink drains a bottle.

Hoorah then for the Sundance Lab, for helping to develop this fiercely out-of-the-ordinary winner of the Camera d’Or (the award for best first feature) at Cannes, a film that blindsides you with its breathtaking originality and sheer vitality.

Part fantasy, part magical-realist melodrama, its secret weapon is Hushpuppy, a human hurricane of a child, seeking answers about why her ailing father and beloved village The Bathtub (a shanty town constructed by the film’s creative team ‘Court 13’) are threatened with extinction by the weather.

She’s played by non-pro actor Quvenzhané Wallis, who exudes a tough, beguiling naturalism that makes you believe completely that “If daddy don’t come home soon, I’ll have to eat my pets.”

Her relationship with him forms the heart of the movie, a rush of boozy crawfish parties, head-smacking fights and frantic flights for life. As Wink, Dwight Henry, another non-pro, gives an equally powerful and nuanced performance.

His Wink is an unpredictable but defiant man, struggling to teach Hushpuppy the skills and stories she will need to survive, after a giant storm sends everyone but a hardy handful running for the cities beyond the shattered levee.

The film gets a tad over-ambitious here, attempting to allegorise both 2005’s Hurricane Katrina disaster and the bayou-menacing Deepwater Horizon oil spill.

But first-time director Benh Zeitlin deftly makes these borrowed themes his own, by wrapping them in Hushpuppy’s fantastical visions of the melting icecaps and defrosted, marauding aurochs that menace her home.

Ultimately he whips up a kind of film gumbo, one that throws together gritty yet giddy depictions of rural poverty, storm-lashed adventures, eco-philosophising and arthouse whimsy.

And all of it filtered through whirling handheld Super-16 camerawork and an ethereal score.

Though it sounds like a recipe for chaos, in practice the film’s vaunting ideas, wild story and pitch-perfect performances meld into one another in a truly memorable way.