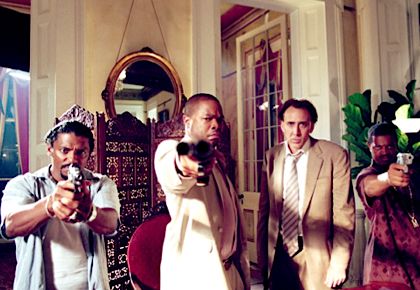 Bad Lieutenant review - It’s not long into Werner Herzog’s lunatic noir about an irredeemably corrupt, nasty, grannyterrorising nutjob with a badge (Nicolas Cage) that you’ll be grinning ear to ear. And in a way you’d expect watching some Apatow-ian battle-of-the-sexes romp, not a neo-noir loaded with gang slayings, reprehensible abuse and alligator roadkill.

But consider this: Bad Lieutenant marks the first ever collaboration between the delightfully deranged Werner Herzog and an off-the-leash Nicolas Cage. Even before the latter’s crackhead copper is hallucinating iguanas at a stakeout, it’s clear that ounce for delirious ounce, this could be the most insanely enjoyable film you’ll see this year. It’s definitely the most maniacal.

Let’s start with Cage: as Terence McDonagh, he’s a tumultuous, delusional human hurricane, storming through Katrina-ravaged New Orleans like a bayou Quasimodo (thanks to a back injury resulting from a rare, early act of conscience), shaking down bottom feeders to find out who murdered five Senegalese drugdealers and abusing his citizen-protector role to feed his spiralling addiction.

When he gets sucked into hooker girlfriend Frankie’s (Eva Mendes) personal affairs and falls behind with his bookie (Brad Dourif), his Swiss cotton knickers (“My girl gave them to me…”) get into even more of a twist and he ends up going rogue as his tenuous grip on sanity slips away.

It’s an intuitive, fearless performance that reminds you what a phenomenal actor Cage can be when he’s not slumming it in paycheque roles. It would be thrilling to believe that Herzog has finally found his new Kinski, but that’s wishful thinking when it comes to a talentwaster like Cage – this is most likely a rare one-off.

You can also forget the film’s 1992 namesake: Bad Lieutenant 2010 bears as much resemblance to Abel Ferrara’s murky, nihilistic soul-stripper as Tony Blair does to a truthful politician. Beyond the substanceand- gambling addict at its core, any parallels are purely superficial. For instance, the scene in which Harvey Keitel famously jacked off in front of two appalled teenage girls becomes one in which Cage’s cackling madman screws a suspect’s girlfriend.

For Ferrara, it signified a traumatic display of spiritual anguish; for Herzog, it’s a bemused glance at McDonagh’s id hurtling out of control. (In typically wry fashion, Herzog issued the following taunt to film academics bound to try sniffing out links between the two: “Go for it, losers.”)

Besides distancing the two Lieutenants, the New Orleans setting gives the new Lieutenant a suitably swampy pall. Through Herzog’s prism, the tragedyafflicted city is an ugly, pitiful landscape of dilapidated neighbourhoods, a fetid vacuum in which “the bliss of evil” can flourish unchecked.

Like a gleeful boy pulling wings off a fly, Herzog delights in piercing holes through the conventional rotes of police procedurals, treating cop-show veteran William M. Finkelstein’s cliché-ridden screenplay as a springboard for his eccentricities and pricking the pomposity of directors who’ve built empires in the genre (yes, you Mr Mann).

Weirdness abounds, to the point of abstraction. The Southern-fried gothic delirium goes to Herzog’s head with phantom iguanas and the breakdancing ‘soul’ of a just-dead dealer. But as he has proved many times before, Herzog’s a gifted puppetmaster: the clarity of his moody, febrile vision means that as dangerously close as Bad Lieutenant skates to the edge of preposterousness, he always reins his trippier instincts back when it matters. Furthermore, he ring-fences Cage with supporting players notorious for their own grand-guignol extravagance, then has them downplay in the star’s presence: Dourif; Val Kilmer as McDonagh’s rotten partner; and Fairuza Balk as his highway-patrolwoman ex.

When Herzog injects occasional moments of tenderness, they arrive as sweet, lyrical relief. But this is a film of tipping-over-the-edge extremes, and when they happen, they happen spectacularly. None more so than in a shocking nursing-home interrogation in which he cuts off one biddy’s air supply, points a gun to the head of another, and screams in eye-bulging rage, “Did you ever think about your kids, sucking up their inheritance through that fucked oxygen tube? ... You’re the fucking reason this country’s going down the drain!” It’s like some demented plea for American health-care reform.

Masterpiece? Not quite – although it’s arguably the best American-set film Herzog has made, a compelling, galvanising character study coated in macabre. Don’t dismiss Bad Lieutenant as just a guilty pleasure; it’s a must-see pollination between two of cinema’s most unique and ingenious talents.