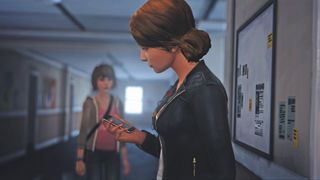 Within the first 30 minutes of popular episodic adventure game Life Is Strange, protagonist Max Caulfield has a disturbing vision of her town being torn apart by a tornado, witnesses one of her classmates shoot an old friend in the bathroom and learns that she has the ability to rewind time. Overwhelmed, she heads outside to wander the school grounds, where she has some choices to make.

She can sign Ms Grant’s petition against surveillance cameras on the school campus; she can ask a boy about his elitist Vortex Club; she can use her newly discovered power to pretend she knows something about skateboarding. Or she can sit down on the edge of the fountain and just take a minute to think.

“This day has been so insane,” begins her internal monologue as she takes a seat, and the camera cuts to show her surroundings from different angles. The focus slowly shifts to highlight a statue or some trees and then back to Max again. “Everything is happening too fast. And none of it makes any sense.”

We’ve all been there. Sometimes it feels like life is pushing in at you from all sides and there’s no room left to breathe. Sometimes you just need to stop and try to process your current drama to free up some mental space. Sure, we’re not all dealing with time-travel paradoxes or whatever, but pain is relative.

While we (hopefully) recognise the need to pace ourselves in our own lives, videogames often ignore these contemplative moments in favour of near-constant action. Of course, the recent rise of the ‘walking simulator’ has brought us the opposite: games that are all contemplation. But some of the most effective games alternate high-energy sequences with moments of calm.

In some games, taking a breather feels jarring, at odds with the high-stakes drama. If Mass Effect’s Shepard is the galaxy’s only hope against the Reapers, does she really have time for fetching items and flirtation? Probably not. But in Life Is Strange, time is Max’s biggest asset. If anything bad were to happen as she gathers her thoughts, she could just turn back the clock and set things right.

Nothing ever actually does happen in these periods; you can leave Max with her own thoughts long after her audible monologue is finished, as the music loops and the same small scenes play out around her. We’re used to this kind of incongruity in games, moments where the narrative suggests that time is of the essence but nothing actually happens without input from the player. Life Is Strange just sets these moments apart.

Each episode contains a few of these opportunities, when Max finds herself alone and comes across a place to unwind. The fountain, with its coins thrown for wishes, makes an appropriate place for her to sit down and think about her ability to change things that don’t go her way, but the other locations probably feel more familiar from our own lives: a bed, a tree stump, a swing.

The monologues vary depending on Max’s surroundings and progress through the story: she might think about what she needs to do next, reflect on recent events or even replay childhood memories. They’re not so insightful that you can’t finish the game without them, but they’re more natural than the snippets you hear when you tell Max to look at things, and, thanks to the voice acting, are more engaging.

With the digital distractions central to our modern lives – Facebook, Twitter, games that occupy just enough of our attention to drown out the voices around us and the ones in our head – it feels like some of us actively avoid being alone with our thoughts. But if this game, with its message about the futility of wishing for things to be different, leaves you with anything at all, let it be a new Max-like habit. Every now and then, stop what you’re doing. Close this website, pocket your phone, and then, for as long as you need, just think. [But do actually come back again after – Ed.]