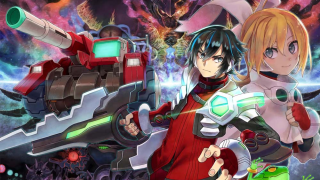 A retro remake of the tank-and-trooper NES classic that feels familiar even as it sands off more rough edges than you might care to remember.

The original Blaster Master (duh), Metroid, or you just want some old-school action and exploration minus the frustration.

Blaster Master lies at the blurry horizon of my long-term memory. Despite starting it up at least a dozen times on my family's old NES, I was never patient or skillful enough to even make it past the first world. I always got stuck in the damn underwater part. I felt a familiar dread as my jumping pink tank named Sophia sank into those dark waters a few minutes after starting Blaster Master Zero, which is a retro-styled remake of the original game. But Master Blast Lake Attempt No. 13, let's call it, went much better than the last 12.

Some of that was because I was no longer playing with the untrained thumbs and easily frustrated brain of a six-year-old. But it was also because Blaster Master Zero is the particular kind of remake that feels instantly familiar - as if you'd pressed pause on the original game, gotten up to grab another Squeezit from the fridge, and then unpaused the new one - while tweaking almost all of its fundamentals for the better.

You still split your time between jumping tank adventures and top-down infantry assaults as frog-studying-scientist-turned-pilot Jason Frudnick. Both aspects feel better to play thanks to modern concepts like "firing diagonally" and "not using the same button to both open doors and duck", though your time in the cockpit is more demanding and fun to play. To be fair, that's also true of the original - at least here Jason can get a little shield device that keeps him from immediately losing his best weapon whenever he gets hit. Other comfy concessions to modern game design are evident, like frequent save points and regenerating ammo.

Blaster Master Zero takes a few pointers from fellow NES expat Metroid to broaden its world while also making it more manageable; you'll do just enough backtracking to appreciate your ever-expanding arsenal of weapons and navigation options, and an easy-to-use map will help ensure you never lose your way. Unless you want to, of course.

It's a lovely little world to get lost in. Blaster Master Zero has a similar approach to the NES aesthetic as Shovel Knight, with nostalgia-courting chunky sprites and menus that feel just a bit too high-fidelity for the old days. You know how Metroid: Zero Mission was a full-on remake of the original Metroid with Super Metroid-style graphics? Blaster Master Zero looks like a further half-step between those. Also, you meet an anime girl with a tail and amnesia who fixes up your tank for you, because the story doesn't matter and developer IntiCreates definitely has a type.

Props for bridging Blaster Master's original Japanese future-war narrative with the frog-chasing, inexplicable-tank-finding hijinks of the English localization, though. That's quite an accomplishment all by itself.