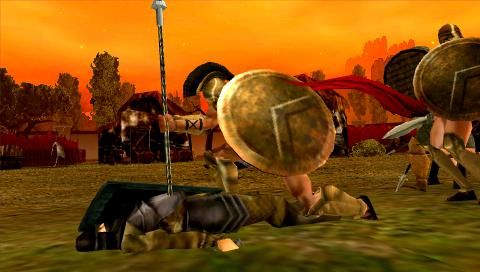 Based upon a sandals-and-swords movie and comic, 300: March to Glory casts you as a bearded, bare-chested gladiator type named King Leonidas. You're trying to stave off the vast army of the Persian king, Xerxes with a small force of only 300 Spartan warriors. At least, we're told there are 300 of you and zillions of them. In practice, it's typically you and one to three companions hacking maybe six or eight other dudes at a time into hamburger, tops.

Combat is all about chaining heavy, light and - if your "wrath" meter is full - extra strong attacks from three basic weapons: a sword or two, a shield (which has its own bashing moves), and a spear that isn't as quick as the other weapons, but which can be thrown or used to shatter enemy shields. This is critical, because after the opening area, practically every single opposing soldier has a shield and blocks 80% of the time. Which actually doesn't so much add tactical depth as it does annoy the crap out of the player.

Your wrath meter also charges special, temporary abilities: healing, an auto-parry ability, a time-slowing intensity, and an added damage "Blood Drunk" condition - which is sometimes the only way to defeat an opponent (usually a boss). For those keeping track, this is more aggravating than both the shield thing and the fact that some enemies must first be knocked down, almost always by a special attack, before they can be hurt. The problem is that too many of your moves are fed by the single wrath meter, so you're often left attacking an invulnerable target just to build the meter back up. Blech.