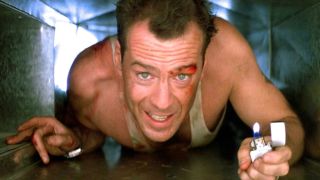 A grizzled New York cop arrives in LA on Christmas Eve to make up with his wife, a high-flying executive for a Japanese corporation whose gleaming 40-storey HQ soars imperiously over downtown Century City. Before the night is out, he’ll have climbed elevator shafts, crawled along air vents, killed 10 gunmen and jumped off the roof.

He’ll have been beaten to a pulp, shot in the arm and hobbled by shattered glass. And he’ll have saved the woman he loves from a sophisticated Euro-thief masquerading as an international terrorist. All in an evening’s work for John McClane, the working-class everyman at the centre of John McTiernan’s modern classic and the primary reason why Bruce Willis is now one of Hollywood’s most bankable leading men.

The blueprint for every high-octane, character-led action movie ever since, Die Hard is pure excitement, blessed with an endlessly quotable screenplay (“Come out to the coast”, “Fists with your toes”, “The quarterback is toast”), memorable characters (Reginald VelJohnson’s benign, doughnut-munching flatfoot, William Atherton’s sleazy reporter) and superb set-pieces that explode off the screen.

Aside from the spectacular mayhem and precision structure, though, it’s the close-up conflict between Willis’ singlet-sporting good guy and Alan Rickman’s sharp-suited villain that lifts McTiernan’s film on to another plane.

Having forked out a whopping $5 million for Bruce, then merely a well-liked TV star with just one hit (Moonlighting) to his name and next-to-no big- screen experience, Lethal Weapon producer Joel Silver realised British thesp Rickman, fresh from his Tony-nominated turn in the Broadway run of the RSC’s Les Liaisons Dangereuses, would make a perfect foil, seeing in his casual intensity and serpentine charm the ideal complement to Willis’ wise-cracking smart-ass.

The 25 best action movies to get your adrenaline pumping

“When Bruce and I first met, we thought that if Gruber and McClane could develop a relationship while communicating over the CB, it would serve the final conflict rather well,” the future Sheriff of Nottingham recalls. “We wanted to steer away from the stereotypical hero-and-villain types of behaviour and try to be as normal as possible on the surface.”

The Englishman’s facility with accents, meanwhile, enabled screenwriter Steven de Souza to engineer a face-to-face meeting between his two antagonists ahead of the climactic showdown, Hans adopting a flawless American brogue to convince McClane he’s one of the Nakatomi hostages. “It was my first day and my first scene in any movie, ever, in Hollywood, at night, and I was also having to produce an American accent in front of an American crew,” Rickman laughs. “So maybe I was a little... tense!”

Dig deeper, however, and you can see in McClane’s victory over Rickman’s pompous pseudo-intellectualism a triumph of no-nonsense Yankee values over European colonial arrogance. Even with his well-trained team of computer, armaments and martial arts experts, Gruber is no match for a straight-talking, regular guy who’s just “doing his job” – a “fly in the ointment” and a “monkey in the wrench” who can out-think, out-gun and out-fight him at every turn and use humour and pop culture as confidence-pricking weapons. (“You Americans, all alike!” sneers Hans. “Well this time, John Wayne will not walk off into the sunset with Grace Kelly.” “That was Gary Cooper, asshole!” Bruce fires back.)

But hey, why stop there? Look at Die Hard close enough and you can see all kinds of coded subversive messages. What is the death of Hart Bochner’s coke-snorting yuppie but a symbol of the demise of the decade’s cynical, “greed is good” mentality? Is not the destruction wreaked on Nakatomi Plaza a wish-fulfilling blast against Japan’s increasing dominance of Tinseltown? And what warm-blooded male can resist a cheer when emasculating shrew Holly Gennero (Bonnie Bedelia) realises the error of her ways, retaking her married name and, by extension, her subordinate role as docile wife and mother?

Less welcome, perhaps, is Powell’s recovery of his instinct to use deadly force, which he lost after shooting an innocent kid. From McClane’s Berretta.92 to Alexander Godunov’s Steyr AUG assault rifle, the NRA could use this as a recruiting video. If there’s one thing that distinguishes McTiernan’s movie from all the Die Hard on a plane/bus/boat copycats it engendered, though, it is its rigid adherence to Aristotelian unities.

Conceived in the days of classical Greek drama, these rules dictate that plays should take place in one place in real time with no superfluous incident. From sunset start to after-dark finish, the film does not waver once, predating 24 by more than a decade and ensuring the breathless tension – stoked by Jan de Bont’s claustrophobic, put-the-camera-anywhere cinematography – remains at fever pitch throughout.

With its efficient combo of excitement, sly humour and sneaky subtext, Die Hard rewired and resurrected the modern-day action yarn. Its legacy can be seen today in every heroic one-man army, sinister English bad guy and nape-singeing fireball escape. Most importantly of all, it’s as compulsively, joyously entertaining as it’s ever been.

Feeling festive? Check out the best Christmas movies of all time.

This feature originally appeared an edition of our sister magazine, Total Film. Pick up a copy now or subscribe so you never miss an issue.