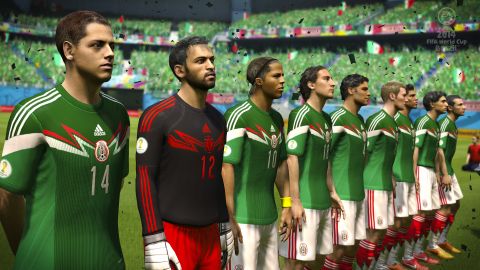 EA clearly lacks confidence in 2014 FIFA World Cup Brazil. This tournament tie-in sheepishly sticks to the Xbox 360 and PS3, so you won't find any of the sexy physics or silky frame-rates that made FIFA 14 on the Xbox One and PS4 shine. This is little more than current-gen FIFA in a World Cup re-skin, created to tick boxes rather than push the FIFA series to new heights.

At least the new skin is a colourful one. Football's sheer sweaty pageantry makes it a world-favourite sport, so the heavy splash of samba spirit injected into this game goes a long way. Here sunlight beams down on luminous green pitches, confetti streams from stands, banners fly, flags wave--this carnival atmosphere is a far cry from the dreary domestic leagues. It's the spicy feijoada to FIFA 14's pork pie, the thong to its builder's bum. In this altogether steamier affair, each match feels like an occasion.

Crowd reactions are the best bit. During replays the action sometimes cuts to fully modelled fans in stands, or to drunken revellers watching screens in the middle of some heaving venue. All that's missing is the brave TV reporter delivering his piece to a camera as he tries to ignore background punters groping his arse. Crowd character models are wooden, and only a few are ever on screen at the same time, but the effort is appreciated. While the FIFA series always looks the part, its replication of an actual broadcast-style presentation often falls flat. World Cup 2014 goes some way to redeeming that.

Another cool touch: managers shake hands before a game. No, your eyes aren't deceiving you. That is the actually Roy Hodgson exchanging pleasantries with the actual Big Phil Scolari. What with the level of import placed on managers in the modern game, it's about time they graduated from generic men in suits. Again though, EA could have gone further. Why don't we see them furiously chewing gum on the sidelines? Or pleading for a bit of Fergie Time with fourth officials? They're a massive fixture of football, so why not here too? On one hand, these affectations have nothing to do with the actual, on screen sport. On the other hand, they have everything to do with it.

The trademark authenticity is here too: 20 new stadiums, 203 international teams, and 15 extra hours of commentary. I’m not convinced the inclusion of nations like The Solomon Islands really add to the experience, but the completism is admirable. Even Clive Tyldesley--trooper that he is--soldiers back into the recording booth to offer analysis and insight about the teams' qualification battles and their history with the tournament. It gives the game a familiar, if slightly tired, feel.

Sadly though, all the innovations in World Cup 2014 are made off the pitch. On it, there's little new to catch the eye. Supposedly, Response Dribbling with the left trigger introduces flicks and turns to let you more easily beat opponents. Supposedly, Pinpoint Passing results in crisper exchanges and more contextual animations, such as outside-of-the-foot curling crosses and more realistic clearances. Supposedly, Over-the-Back Headers enable dynamic air battles where opponents lean and jostle. Supposedly, ball physics themselves have been tweaked, with grass friction and moisture subtlety affecting its flight. Supposedly.

In practice, these tweaks bear about as much impact as a Fernando Torres substitution. I've logged more than 150 hours in FIFA 14 and I'd be hard-pressed to identify World Cup 2014’s new features if they hadn't been given italicised prominence in the press release.

The only two additions that genuinely add to the FIFA formula are trivial. The first is Goalkeeper Antics, in which keepers can put off penalty takers with piss-take animations such as the matador, the wobbly knees, or the good old put-the-ball-here,-I-promise-I won't-dive-for-it schtick. The second is Set-Piece Tactics. Here you can direct teammates to make runs using the D-pad, whether it be to near post, far post, or edge of the box. Or you can--rather naughtily--have them crowd the keeper to block his view. Defenders, meanwhile, are more reactive at guarding open space, and goalkeepers are better at shouting barking orders at them. Are these two improvements worth a whole new game? No, but they're at least noticeable novelties all the same.

Even the game’s marquee mode is a little limited. Road to the FIFA World Cup is included to capture the thrill of going from qualification, right through to lifting the trophy for the nation of your choice. It’s nicely authentic, but likely to lose its lustre the minute the final whistle sounds on the last match of the tournament. After that, most will probably head back to their FIFA 14 saves.

Elsewhere, Captain your Country is basically international Be A Pro mode, letting you control a single player to lead your country through qualifying and into the finals. Skill games, online friendlies and Football Club all return, too. They pad out the package, even if this is padding you’ve seen before. The most promising mode, though, is Story of Qualifying. It presents over 60 real scenarios to reenact, each taken directly from the World Cup qualifiers. While only a handful will mean anything to you unless you're heavily invested in the exploits of all 200 national squads, it's a decent dose of wish fulfilment for those who find themselves recreating the weekend's fixtures on FIFA 14. Promisingly, EA is also planning to let you relive games from the World Cup itself, setting up the formations, team sheets, forms, and conditions as they happen.

So, out go the domestic leagues. Out go thousands of teams and players. Out go a good handful of gameplay modes. And in their place? Bolted-on presentation features (like crowd reactions, and a bit of new commentary), a few paltry gameplay improvements that are either hard to care about or impossible to notice, and a sprinkling of World Cup modes. Though it nails the pomp and pageantry of the tournament, World Cup 2014 is simply not worth the money.