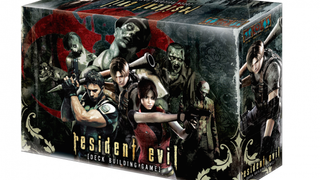 If you're like me, video games don't end when you set down the controller. Books, comics, movies, and more - I'm always looking for ways to work video games into my non-video game activities. And how do you get your fix when your console is on the fritz and the power is out and you're snowed in? No, put down the iPad. And the 3DS. And your phone look, you're missing the point.

Sometimes you just want to enjoy the dystopian single-player world of BioShock with a handful of friends, or you want a more laid-back experience that won't tax your exhausted thumbs. That's where board games come in. Over the last few years, there have been some surprisingly stellar tabletop adventures based on your favorite games. Round up a few friends (and a few hours of game time) and dive into these new adventures from classic games.

XCOM: The Board Game

The board game: XCOM: The Board Game is the most fun you'll have watching everything go horribly wrong. You and up to three friends take on different roles within XCOM, and must work together to repel the alien menace. Each turn has a time limit, and within that brief window UFOs descend upon Earth, aliens assault your base, countries fall into panic, and so much more. You're constantly prioritizing and re-prioritizing different tasks on the fly in a mad dash to complete everything you need to before the end of turn.

Why it works: It's all about the app. Playing this board game requires the use of a free companion app, which keeps time during turns, tells you what the aliens are up to, and keeps track of your overall progress. Turns here feel like a rounds in the cooperative shouting game Spaceteam, with one player calling out commands and updates while the others scramble to address them. In XCOM: Enemy Unknown, you constantly feel like you have 10 things to do but only enough time to finish one. The board game perfectly adapts that frantic desperation for the table top.

The board game: Much like the Witcher novels, The Witcher Adventure Game is about trying to do good in a world that wants you to fail. Up to four players assume the roles of Geralt and his companions, and together travel across the Northern Kingdoms completing quests and slaying monsters. Each character has special skills - whether it's Triss' magic or Dandelion's silver tongue - for handling problems, and requires different strategies to excel. Thematically, all players are on the same side, but at the end of the day only one will be crowned the winner.

Why it works: Your enjoyment will vary depending on how forgiving you are of the Witcher's central conceit: that everything is bad all the time. In the game you must face down an endless torrent of monsters - coupled with constant hindrances from the Foul Fate deck - that keep your characters under constant siege. This makes the game feel like a slog at times, and the dearth of cooperative actions certainly doesn't help. But the Witcher universe is never about playing fair, so prepare accordingly.

The board game: If the internet's ceaseless discharge of memes and references haven't ruined Portal for you, then you may yet enjoy this game of uncooperative cake acquisition. Players assume responsibility for a herd of test subjects and guide them through Aperture Science performing tests and collecting cake tokens. Cake is your key to victory, as having the most cake wins you the game. Much of this game's strategy revolves around keeping your cake pieces safe while driving your opponent's pieces into the incinerator.

Why it works: It doesn't focus on portals. In fact, portals are just a small part of the larger puzzle that is Aperture Science, which is a modular game board players reshape throughout the game. Players also collect and play cards that change the rules of the game itself for all players - until another card overrides it. Together, these mechanics and others make PTUCAG very unpredictable. Plans are often useless - but planning indispensable - as you try and navigate the chaos unfolding around you.

The board game: Assassin's Creed: Arena introduces what is perhaps the grimmest premise on this list: competitive assassinations. You and your heated assassin rivals start at the edges of a large game board and must work your way towards the center, which is full of poor saps awaiting the pointy end of a hidden blade. Completing assassinations - among other tasks - earns you points needed to win the game. Guards also patrol the board and can weaken, or kill, your character if you're spotted, and there's a fair amount of in-fighting that inevitably breaks out among the assassins themselves.

Why it works: When it gets rolling, AC: Arena only takes about a half-hour to finish, making it one of the shortest games on this list. It's very easy to pick up and learn as well; the most complicated component is probably the equipment cards, which provide simple modifiers. There's a great sense of rivalry between the players as you try and balance keeping others down while boosting yourself ahead. The most common complaint is that the various components aren't as high quality as, well, the other games on this list - but don't let that stop you from enjoying this fast-paced assassination game.

Gears of War: The Board Game

The board game: Gears of War follows the story of a couple of dudes and their quest to clamber over every chest-high wall in existence--and deal with a few unsavory Locust while they're at it. The board game adaptation exchanges its so-visceral-that-word-is-now-meaningless combat for dice rolls and plastic figurines.

Why it works: Gears of War has always been about the teamwork between its four main heroes, and the board game highlights that perfectly. Up to four players take on the roles of the various members of Delta Squad as they run through a series of missions included in the game, and you'll have to work together to make it through each scenario. With randomized map layouts and enemy placement (thanks to the modular tiles it uses), running through the same battles will feel different every time. And yes, you can even use chest-high walls as cover.

Bioshock Infinite: The Siege of Columbia

The board game: Find the girl, wipe away the debt. And deal with a bunch of jerks in giant mech-suits. And Thomas Jefferson robots with rocket launchers. And two factions that both want to use you for their own gain. Oh, and time rifts, too--can't forget those. Bioshock Infinite's many individual parts make for a compelling whole, but It's a hell of a lot for a board game to take in. Which is why The Siege of Columbia wisely focuses its strategic gameplay on the struggle between the Vox Populi and the Founders.

Why it works: While running around Columbia as Booker and Elizabeth is fine in a video game, it probably wouldn't work so well as a board game. Instead, The Siege of Columbia provides a grander, birds-eye view on the conflict raging throughout the flying city, as you attempt to control Colombia's different territories while preventing your opponent from doing the same. Not that Booker and Elizabeth are gone completely--no, they're off blowing shit up on their own, and you'll have to fend them off, as well as your opponent.

Civilization: The Board Game

The board game: World domination is an ambitious goal, but doing so over the course of thousands of years seems especially daunting. Luckily, you've got friends that can help you out--or stab you in the back if you're not careful. Building your civilization up from the stone age is hard work, but seeing all of your effort culminate in a fleet of jet bombers is worth the wait. Just watch out for Gandhi--he doesn't look like much, but he's a wily one.

Why it works: Civilization was already a turn-based strategy board game that Sid Meier admittedly cribbed from during development of the PC version back in 1991, so a board game version of the video game just makes everything come full circle. Actually, make that two versions--the Eagle Games edition (now out of print) is incredibly complex and features a static map of Earth, while the more recent Fantasy Flight edition is far less obtuse and more closely emulates the exploration aspect of the computer game.

Starcraft: The Board Game

The board game: A turn-based adaptation of the real-time sci-fi strategy game (zerg rush) that pits three wildly different races (zerg rush) against each other, with dozens of buildings, units, vehicles, and upgrades (zerg rush!) that allow for countless strategic avenues (ZERG RUSH!) against your foes. Or you could always, you know, zerg rush them.

Why it works: If there's one thing that board games do insanely well, it's finding ways to turn resource management into a competition--and a game like Starcraft certainly fits the bill nicely. Plus, by focusing the conflict between the Terrans, Protoss, and Zerg on a much larger scale, it feels like you're engaged in a full-sized campaign every time you play.

The board game: It's a showdown between the greatest fighters in the world--fighters like Ryu, M. Bison, and Chun-Li, who are capable of shooting fireballs out of their hands and kick a thousand times in a split second. And what better way to exemplify the bare-knuckle brawl between two hardened opponents than a turn-based card game?

Why it works: I know what you're thinking, but Street Fighter as a card game actually works pretty well. Here, you have a set of basic cards that you use to upgrade your attacks to become more powerful special moves. There's never a moment where you're not reacting to something, whether it's chaining massive combos or waiting for the right moment to strike. You can even customize your deck with additional cards to tailor the game to your fighting style. Not too shabby.