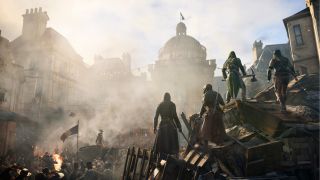 When a Steam game is bombarded with reviews after the game's developer does something, it usually results in heaps of negative ratings. The Borderlands series, for instance, was recently targeted by just such a review bomb when it was revealed to be an Epic Store exclusive on PC. But after Ubisoft gave away Assassin's Creed Unity on PC as a nod to the Notre Dame Cathedral, hundreds of players took to Steam to shower the game with positive reviews.

"Thanks Ubisoft & Assassin's Creed Unity for giving us an opportunity to appreciate what Notre Dame used to be," one reviewer wrote. "God bless France."

"Let us pray for Notre-Dame. Thank you for making the game," another wrote.

"Prayers for Notre Dame," said another.

At the time of this writing, Unity has received around 470 positive reviews in the past few days, the vast majority of them referencing the Notre Dame Cathedral. If you haven't heard, the real cathedral was partially destroyed in a fire earlier this week. Because Unity's rendition of Paris contains an exquisite recreation of the cathedral, Ubisoft is giving the game away for free to "give everyone the chance to experience the majesty and beauty of Notre-Dame the best way we know how." You can still claim a free copy for keeps through 3am on Thursday, April 25.

I know there are bigger problems in the world than the condition of one cathedral, and I know these positive Steam reviews won't do squat for the Notre Dame's restoration efforts, but it's still nice to see people rally around something like this. Some people have speculated that Unity's detailed 3D model of the Notre Dame could serve as a guide for architects and artists brought in to restore it, and while I don't know if that's true, the game's clearly gotten some people to smile in the past few days. That's gotta count for something.

In another tribute to the Notre Dame, a No Man's Sky player recreated the cathedral in space.